Collioure and the Parmesan Sablé

October 22, 2009
Sometimes I do actually get out of the kitchen and I've just come back from the South of France, so let's start there. I’m all for trying and using local ingredients but sometimes this can be pushed a little far. For instance, I once had a salad in Normandy that combined all the local ingredients that the chef thought were significant, namely fish, apples and mustard (there was a mustard producer nearby). It was truly horrible 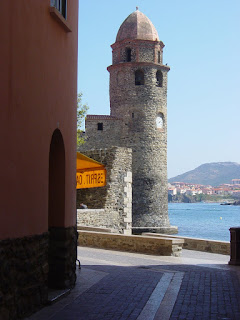 But you can’t go to Collioure without trying the anchovies. The prospect of small, salty fish wasn’t filling me with excitement but having tried the anchovies of Maison Roque with the traditional red pepper, I have been persuaded that they can be a serious delicacy with a lot of possibilities.
I particularly enjoyed the anchovy salad in the restaurant “Ma Maison” in Sorède which was served with a parmesan sablé. A little difficult to eat elegantly but it worked. The following is my way of creating a savoury sablé, albeit not really a professional looking one - nobody would mistake me for a professional. Unlike most biscuits I’ve had that are flavoured with parmesan, the sablé is not crisp – far from it. Look at these biscuits the wrong way and they’ll fall apart. But that’s what’s so nice about them. Good with an aperitif as well as a salad provided that you don’t mind the risk of crumbs in the carpet.
Parmesan Sablés
This makes around 20 – 25 biscuits of about 5cm diameter.
120 g unsalted butter, softened
A generous pinch of salt
130 g plain flour, sifted
18 g finely grated parmesan
1 egg yolk
Beat the butter until very smooth and creamy. Mix in the parmesan and salt without beating too vigorously and then do the same with the egg yolk. The mixture should be well blended and smooth but don’t overwork it. Fold in the flour.
Once the flour has been incorporated, the dough will seem a little crumbly and that’s the way it should be. Turn the dough out onto a work surface and gently work it into a sausage shape, about 20 cm long. Carefully wrap the sausage in cling film and chill in the fridge until the mixture is quite firm. This will probably take a couple of hours or, if it’s easier, leave it overnight.
When you’re ready to bake, preheat the oven 170°C (for a fan oven, a bit hotter for non-fans). Cover a baking tray with a silicone sheet (or non-stick paper). Unwrap the cold dough sausage and cut it into slices of at least 0.5cm but no more than 1cm width. Place on the baking tray, leaving a gap of 2cm – 3cm between each biscuit. Sprinkle with some sea salt flakes and a quick twist or two of black pepper.
Bake for 15 – 18 minutes; when ready the biscuits should be only slight browned.
Allow the biscuits to cool for a few minutes on the baking tray then carefully lift them onto a cooling rack (preferably non-stick) and wait until they’re cold before eating. 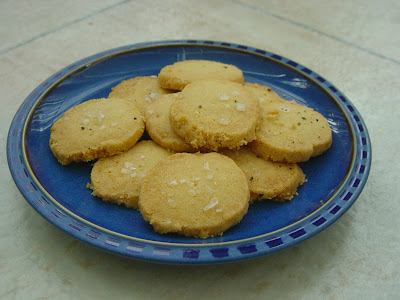