December 29, 2009
This post is a little late since I’ve missed the real mince pie season, but it’s the end of a long journey for me so I think I should record it. I admit to not being a huge fan of mince pies, and I probably wouldn’t bother with them at all if it weren’t for the fact that my wife really likes them. So it’s been a challenge for some time to produce one which I could honestly say that I liked. 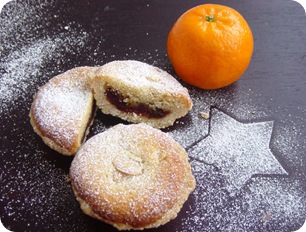 The first hurdle was the mincemeat itself which often feels to me like wading through fat – I don’t really get the point of suet at all. Last year I found Pam Corbin's recipe for suet-free mincemeat, based on cooking down plums before adding the more usual bits together with a drop of sloe gin. It’s healthier but, more importantly, tastes fresh and fruity.

But last year’s mince pies still didn’t really work for me because the pastry just didn’t seem right. This year we tried Orlando Murrin's pastry from the recipe Unbelievably Easy Mince Pies on the BBC site, which gives a crumbly pastry that I think is exactly what’s needed.

Finally, I read Richard Bertinet in the Times a few weeks ago saying that he felt that the ratio of pastry to filling was wrong in a conventional mince pie and that he topped his with frangipane with a drop of brandy included.

Combine those three elements and much to my surprise there was finally a mince pie about which I felt genuinely enthusiastic. Perhaps I wasn’t quite as surprised as the Frenchman I saw biting into a mince pie in a café in Devon one summer. Despite the sterling efforts of the waitress I don’t think that he’d quite grasped the strange English concept of mincemeat.
Mincemeat Pastry