August 27, 2010
Last year we planted some canes of a variety of raspberry called 'Polka' in the garden and we're currently harvesting plenty of beautifully flavoured raspberries. What better than to combine them with some chocolate?

Adding chocolate to mascarpone will lose some of the silky smoothness of classic tiramisu but it does add a depth of flavour as compensation. What makes a real difference to tiramisu in my opinion is using freshly baked savoiardi, so I've included my recipe for these at the end of this post.

When making this I used an excellent English raspberry liqueur from Fonthill Glebe , which has the added advantage of sounding like a character from Dickens: 'Ah, Miss Crumhornly,' said Mr. Pickwick, 'allow me to introduce my very particular friend, Mr. Fonthill Glebe.' But I digress.

It's probably best to keep the portions on the small side, since this is fairly rich. The amount given should be too much for two people but they'll probably eat it all anyway.


4 savoiardi (although that depends on how big you make them, see below)
150 g raspberries plus an extra few for decoration
70 g white chocolate, melted and cooled
150 g mascarpone
40 g icing sugar plus 2 extra tablespoons
a squeeze or two of lemon juice
1 tbsp raspberry liqueur

Before you start, take the mascarpone out of the fridge – the colder it is, the harder it is to work.

Purée 100 g of the raspberries in a blender with 2 tablespoons of icing sugar and a squeeze or two of lemon. You may need to vary the amount of sugar or lemon depending on the sweetness or otherwise of the raspberries. Put the purée through a fine sieve and stir in the liqueur.

Tear the savoiardi in half, place them in the raspberry purée, quickly turn them over and transfer them to the bottom of your serving dishes or glasses. You should be left with some raspberry purée; lightly crush the other 50 g of raspberries into it and set aside.

Spoon a layer of the mix over the savoiardi followed by a layer of the reserved raspberry purée. Fill the dish with the rest of the mascarpone and chocolate and decorate with a raspberry or two.

Chill until needed but take them out of the fridge before serving – both the flavour and texture suffer if they’re too cold. 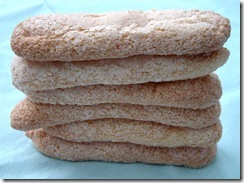 The amount of ingredients given here will make a fair number of savoiardi, probably between 30 and 40 if you make them small. They keep pretty well in an airtight tin, though. If you want to serve some of them alongside the tiramisu or another dessert, then try varying the topping – a sprinkle of chopped nuts works well. Alternatively, the mixture is fairly similar to that of Gâteau de Savoie, so you could bake a few savoiardi and make a small Gâteau with the rest.

In a large bowl beat the egg yolks and caster sugar until pale and thick, adding the vanilla bean paste towards the end.

In another bowl whip the egg whites to the soft peak stage, then gradually add the icing sugar while continuing to whisk until the mixture is firm.

Now you need to fold the flours and egg whites into the yolk mixture. It's best to do this gradually: I suggest adding half the combined flours and about a third of the egg white to start off with. You need to do this folding gently and calmly – I found that listening to Cara Dillon singing helped.

When the mixture has come together nicely, put it into a piping bag with a fair-sized nozzle – 2 cm is about right. Pipe short lengths onto the prepared baking trays, leaving a little space for the savoiardi to spread. Of course, you don't have to pipe the mixture, you could just spoon it, but I'm being vaguely traditional for once. Sprinkle over a little caster sugar and bake for around 10 – 12 minutes until the tops are light brown. Definitely err on the side of  a lighter shade of brown if you're in doubt.

Let them cool a little on the trays before transferring to a wire rack to cool completely. 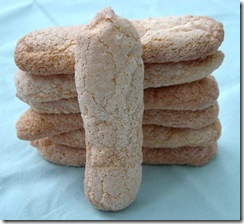