April 18, 2011
For this month’s Random Recipe challenge Dom of Belleau Kitchen has asked us to select something from our first ever cookbook. This is a big problem. I genuinely admire people who remember everything so well that they can tell you their life stories in great detail and in the right order. That doesn't really work for me. The further back in time, the less clear and distinctly odder it seems to become. Even more, I admire people who have managed to hold on to possessions such as cookbooks through all the changes in their lives.

So I really don't know which cookbook I might have owned first. I can remember having a number of books in the seventies: books of cake recipes, French cooking and a traditional British cookbook. These were last seen in Tooting or Clapham around 1980. Unfortunately, I can't remember what any of those books were called or who they were by.  (For any reader unfamiliar with the suburbs of London I should point out that neither Tooting nor Clapham are a collection of thatched cottages gathered round a quaint village green.)

So I'm reduced to thinking what’s the earliest book that I cooked from all those years ago and that, by some strange stroke of luck, I still have around? And lurking at the back of a dusty pile of old books was dear old Robert Carrier. The book in question is “Cooking with Robert Carrier” which was published in the early eighties but is a greatest hits selection of recipes from the sixties and seventies. Mr Carrier OBE, who is sadly no longer with us, was about as close as you could get to a celebrity chef back then and a welcome alternative to many of the styles of cooking on offer.

The random recipe selected from this book is Pear Clafouti, which is fairly classic and lacks some of the flamboyance and, luckily for my health, the large amount of cream of some of his other recipes. The good news is that the recipes still work and still taste very good. Mr Carrier suggests that this will serve 4, but I think 6 is more like it. I have adapted this recipe a little but I think he'd forgive me. 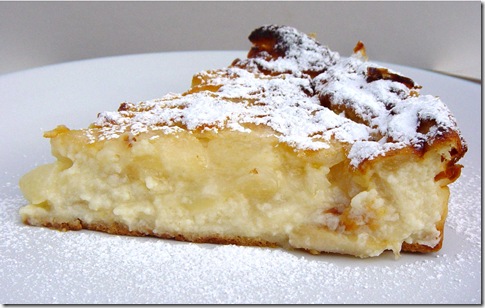 Sift the flour and salt into a bowl, make a well and pour in the eggs. Stir thoroughly while gradually adding the milk, then beat well.

Peel, core and slice the pears and mix them with the sugar, lemon juice and cinnamon (or vanilla – I’m not that keen on cinnamon and, for some reason, especially not with pears).

Grease a 20 cm baking dish or cake tin. Stir ¾ of the pears into the batter and pour into the tin. Arrange the remaining pear slices over the top and brush any exposed bits of pear with a little melted butter.

Bake at 180°C for 40 – 55 minutes until it’s brown (but nor burnt) on the top and set (but not too firm) in the middle. Mr Carrier suggests that 40 minutes will be enough but this will depend on just how juicy your pears might be – the more liquid, the longer the cooking. I think this is best served at room temperature, sprinkled with icing sugar and maybe with a little crème fraîche on the side.