Pork Cooked in Orange and Lemon

February 16, 2012
The Random Recipe challenge hosted by Dom over at Belleau Kitchen has reached its first birthday and for this anniversary challenge Dom has asked us to return to the book we used for the first ever event. For me that was the ‘The Cuisine of Alain Senderens’.

I have huge admiration and respect for M Senderens, mostly for his masterly cuisine but also because he had the courage to tell the Michelin guide he didn't really want his three stars any more. On the other hand, finding a recipe that would be suitable for the challenge wasn’t easy, partly because we’re trying to eat a little less fat around here at the moment and partly because we’re not rich. The recipes in this particular book take no prisoners. They include a lot of cream and butter as well as plenty of lobster, turbot, oysters and frog's legs. Eventually, after a few random attempts, I came across this dish, although I confess that I’ve simplified the recipe and reduced the fat a little. The result is simple but, happily, very tasty. 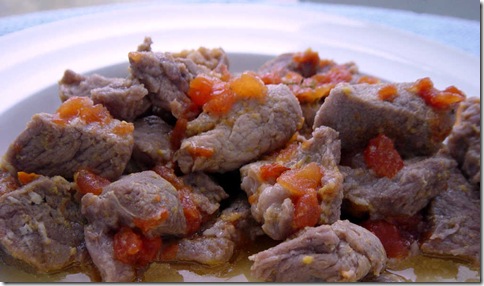 You need to start this dish the day before you want to eat it to allow time for the marinade to work. This will serve 2.

Squeeze the juice from the oranges and lemons. Peel the garlic cloves, crush them in a pestle and mortar with the oregano and mix into the orange and lemon juice. Season the pork, pour over the juice mixture, cover and place in the fridge for at least 12 hours.

The next day, drain the pork thoroughly, reserving the marinade. Peel and deseed the tomatoes and chop the flesh quite finely. Use a cloth or plenty of kitchen paper to dry the pork (it’s important to do this thoroughly) and fry the meat in a large pan with a little olive oil for around 5 minutes. Remove the pork from the pan and pour away any excess fat. Add the marinade and let it reduce by about half. Add the tomatoes, the stock, the bay leaf and the thyme. Return the pork to the pan, bring to a simmer, cover the pan and let it cook gently for 35 – 40 minutes until the pork is very tender.

At this point, you could simply remove the bay leaf and serve the pork in its sauce, but I prefer to remove the pork and allow the sauce to cool before skimming off any fat. Check the seasoning and add a little honey if the sauce tastes a bit too sharp. Reheat the pork in the sauce before serving.

I think this is best served with plain rice to soak up the strongly flavoured sauce.