June 24, 2012
For this month’s Random Recipe challenge Dom at Belleau Kitchen has asked us to find a recipe from the middle of a randomly chosen book.  So I randomly selected the shelf of shorter books (in height, not length), closed my eyes and grabbed a paperback copy of ‘Jenny Baker’s Cuisine Grandmère’. This is a fine collection of recipes from Northern France published back in the nineties. Halfway through I found myself at a recipe for Far aux Pruneaux, the classic dish from Brittany. The far is a batter pudding containing prunes and not only is it really easy to make, it’s also delicious.

It’s possible to make this dish with fruits other than prunes – I know that there are many people who hate the reviled prune for some reason. Chunks of apple fried in butter are particularly nice as an alternative but you could also use poached pears or dried fruit such as big, juicy raisins.

I’ve come across many versions of this recipe and I confess that I’ve not stuck faithfully to Ms Baker’s ingredients and method. There’s no real reason for this other than I suppose I’m stuck in my ways. For instance, Ms Baker suggests using calvados in the recipe and there’s definitely nothing wrong with that suggestion but whenever I think of Breton cakes or puddings then I think about rum. Rum turns up a lot – I think rum used to be imported through Brittany. Or maybe I’m talking nonsense again and they just like the stuff. If you want to avoid the alcohol, you could use weak, black tea instead.

The far is very often eaten warm as a dessert, probably with a little crème fraîche alongside, but I have to confess that I rather like it as a snack at room temperature. (Eating it while wandering along a Brittany beach would be particularly pleasant.) It’s also very good as part of a lazy Sunday breakfast, in my opinion. 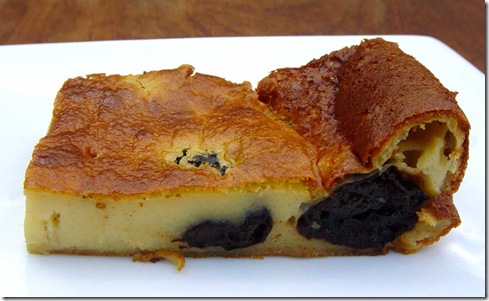 You should get 10 decent sized pieces from this amount of ingredients.

Soak the prunes in your chosen alcohol for a few hours or overnight.

You need a bigger dish for this pudding than you might think due to significant expansion potential. A 2 litre shallow gratin dish is ideal. Butter the dish thoroughly. Preheat the oven to 200°C.

Traditionally, of course, the dish is made strictly manually but I use a stand mixer to make it even easier. Beat the eggs well, then beat in the sugar followed by the flour. Continue beating as you gradually pour in the milk. Finally, stir in the prunes and any remaining rum or calvados.

Pour the mixture into the buttered dish, distributing the prunes fairly evenly but randomly. Bake in the oven for 40 – 45 minutes until the far has puffed up and is golden brown on top. I find that the top of the far can look a little uneven and some people sprinkle on icing sugar to make it prettier. Personally I think a bit of variation in the top is a good thing. Cut into slices and eat whenever and however you please.