August 30, 2012
I don't often talk about the goings-on in my garden, largely because I think that there are many bloggers who are much better informed than I am on matters horticultural. However, I can't resist a short digression on the very curious soft fruit known as the pineberry.

Just a few short years ago articles started appearing on gardening sites about strange berries that looked like white strawberries with red seeds and that tasted a bit like pineapple. They were frequently believed to be April Fool jokes. The wildly different opinions on how good they tasted didn’t help. Some said they tasted of nothing at all, while others said that they were the best berries that they’d ever eaten. 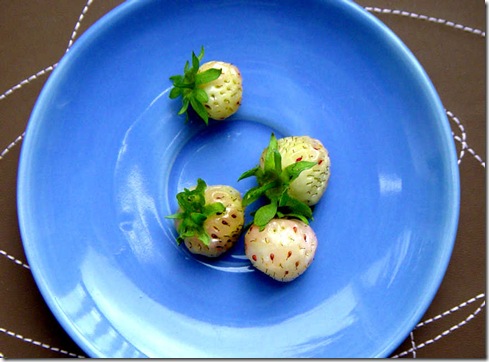 Last year I got hold of a few plants and grew some for myself and, for what it’s worth, here are my very unscientific and highly personal conclusions.
Although I’ve never seen them in the shops, I’m told that pineberries are sometimes sold in limited quantities in supermarkets and upmarket (or, to put it another way, expensive) grocers.

Digression over - I promise to get back to recipes shortly.
Strawberries