Crunchie Tuiles and The Kitchen Music of 2012

December 23, 2012
Last December I suggested making tuiles out of glacier mints. This year, in my seemingly endless and slightly pointless quest to make tuiles out of unlikely things, I've used Crunchie bars. (In case you've never heard of them, Crunchies are chocolate coated honeycomb bars). Honeycomb tuiles have turned up on the menus of many a fine restaurant but this is the downmarket version. It’s a quick and easy way to produce very tasty, very sweet tuiles that will make a simple dessert a bit more special. 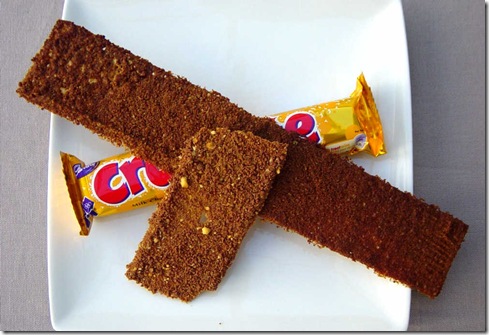 Make sure that your Crunchie bar or bars are cold, break them up a little and place in a food processor or blender. Blitz them until they're reduced largely to powder, although a few slightly bigger bits can add a nice contrast. Preheat the oven to 170°C. Avoid using a fan setting if you can because it might spray the powder around the oven. Line a baking tray with a silicone sheet or some very non-stick paper. Spread a layer of the smashed up Crunchie bar onto the silicone sheet. The layer should be reasonably even and thin but don’t make it too thin or the tuiles will be impossibly fragile – around 2 or 3 mm will be about right. The tuiles will be a little neater if you make a template out of card or a piece of spare silicone sheet when you spread them onto the baking sheet, but it’s not essential.

Remove the template, place the tray in the oven and bake the tuiles until they melt and merge together but before they start to burn. Somewhere in the region of 2 to 5 minutes should be enough. Test by touching lightly (carefully, they're hot) – if they feel relatively firm and no longer like powder, then they should be OK. Remove from the oven and allow to cool completely before attempting to remove them carefully from the tray. The tuiles keep pretty well in an airtight container and if any fall apart or get broken, then they’re still delicious sprinkled on ice cream. 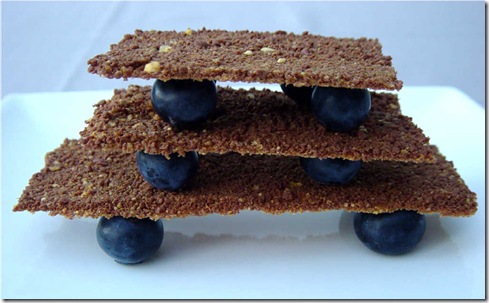 I admit that’s not much of recipe – in fact, it’s more of an excuse for my annual piece of blogging self-indulgence: My Favourite Bits Of New Music That I've Listened To While Cooking This Year. (I've really got to think of a snappier title). This year I've particularly enjoyed the strangely addictive ‘Human Don’t Be Angry’ album or, for sheer quality, Karine Polwart’s ‘Traces’ and The Staves ‘Dead & Born & Grown’. But they’re not really the music that I choose for cooking. That has to be joyous pop and this year nobody’s done joyous pop better than those young whippersnappers from Oxford Alphabet Backwards. Their first album ‘Little Victories’ was released this year.

Miniature Dinosaurs were also helpful at times of difficult baking this year. Their ‘Turn It On’ EP was released in November.


And sadly there are occasions when I just can’t resist singing very badly in the kitchen. This year’s song that forced the neighbours to close all their windows and doors is ‘Penitentiary’ by Houndmouth. (This band also wins the ‘most significant beard on a drummer’ award). Their first EP, just called ‘Houndmouth’, was released in August.