June 16, 2013
The cherry trees at the local pick-your-own farm appear to be laden with fruit, which hopefully will begin to ripen nicely over the next few weeks. So I thought I'd get in quickly with this recipe that I've been saving up since the last year's cherry season.

This is an easy and refreshingly different little pickle that works particularly well alongside cold meats, terrines and pâtés, but will also sit very happily alongside cheeses and richer meats like duck. As a bonus, once you've eaten the cherries, filter the pickling mixture and you’ll have a very fine cherry vinegar that can be used in salad dressings and marinades. The cherry vinegar is also excellent when used to deglaze the pan after cooking beef, lamb or duck.

There are a number of old British recipes for cherries in vinegar as well as many different versions of ‘cerises au vinaigre’ in various parts of France. My version is actually based on recipes from the Picardy region and I reckon that makes it virtually local. 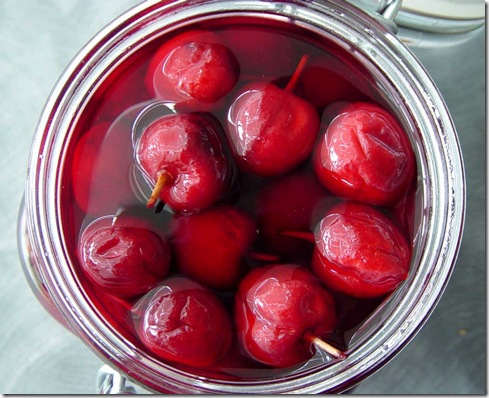 Actually, this version is not really typical of most British or French recipes. Traditional British versions are usually spicier and often use the herb English mace, while many French recipes contain cinnamon and cloves. If you’d prefer the spicier flavour, then add a piece of cinnamon stick, some coriander seeds and maybe a few cloves to the vinegar before heating it. You could also substitute English mace sprigs for the tarragon.

The amounts in this recipe will fill one jar of around 750 ml but treat the quantities here as a guide, since the size and shape of the cherries will make a difference to how many you can fit in a jar. Essentially, you should aim to fill your chosen jar three-quarters full with cherries and then fill it to the top with the vinegar mixture. 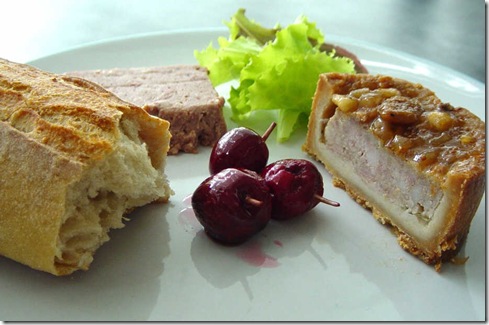 Store the cherries for at least 2 – 3 weeks before using, although some people consider it a crime to eat them before 10 –12 weeks. The cherries should keep for at least a year but are so good with summer salads and picnics that they don't usually last very long at all.

Sterilise a suitable 750 ml jar. Wash and dry the cherries. Don’t remove the stalks but cut them off close to the cherry. Don’t stone the cherries. Pack the cherries into the jar until it’s around three-quarters full. You can pack them in quite tightly but don’t crush them. Tuck the tarragon sprigs and the bay leaf in among the cherries.

Put the vinegar, sugars, lemon zest, salt, pepper and nutmeg in a pan and place on the heat. Bring to the boil, stirring frequently to ensure that the sugar has dissolved completely. Allow the mixture to boil for a minute or two, then take off the heat and let it cool.

Pour the cooled vinegar over the cherries until the jar is full. Seal and place in a cool, dark cupboard for at least 2 – 3 weeks. When serving, remember to warn people about the stones.
Cherries France Pickle