November 21, 2013
The cuisine of Picardy is not the best-known or trendiest style of French cooking but I don’t care. I like it anyway. The dishes tend to be straightforward, made with familiar ingredients and are full of strong, comforting flavours. Admittedly, some of them can also be pretty rich and a stranger to the notion of portion control. Caghuse is one of the more restrained Picardy recipes. It’s often served cold in Picardy but, while there’s nothing wrong with that,  I think it’s nicest served hot on a cold day.

There are different ways of spelling the name of this dish and there are many different ways to make it too. Essentially it’s a one pot dish of slow-cooked pork with onions and vinegar but there are plenty of possible variations along the way. I use chicken stock and cider but beef stock and beer can be used instead. You could also add some herbs to the dish, if you fancy – sage and thyme work well. Strictly speaking, the pork should be cut from the leg and should be on the bone, but I use boneless shoulder steaks, which are usually decently priced and work well for me. A few of the fine new potatoes grown in Picardy are probably the most common accompaniment, but some restaurants serve the dish with rice or chips. I wouldn't say no to some green beans alongside too, possibly tossed with a fair bit of garlic. 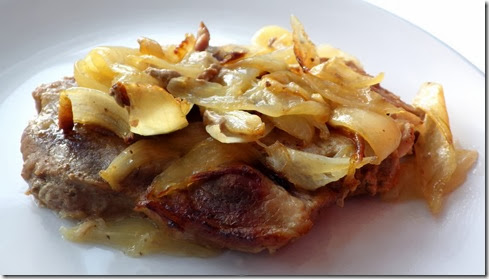 800 g boneless pork shoulder steaks (preferably not too thin)
400 g onions (prepared weight)
A generous knob of butter (or lard)
100 ml dry cider (or beer – a bière de garde would be ideal)
40 ml cider vinegar
150 ml chicken stock (or use a beef stock)
½ tsp sugar (this is definitely optional, but I like a trace of extra sweetness in this dish)

Ideally choose a casserole dish that can be used both on the hob and in the oven and is large enough to contain all the pork in a single layer. Cut the onions into thick slices. (I cut off the top and base of the onions, peel them, slice them into segments from top to bottom and then separate the layers).

Preheat the oven to 160°C. Place the casserole on the hob and melt the butter over a medium heat. Fry the pork until it’s lightly coloured on both sides. Remove the pork, turn down the heat and deglaze with the cider and cider vinegar. (Don’t allow the cider and vinegar mix to reduce too much). Spread half of the sliced onions over the base of the casserole. Season well with salt and pepper. (You could add a little sage or thyme at this stage if you fancied it). Return the pork and any juices to the casserole on top of the layer of onions. Again, season well with salt and pepper. Scatter over the rest of the onions and sprinkle over the sugar, if you’re using it. Pour in the chicken stock.

It’s now ready to serve, assuming that you want to eat it hot. At this stage, some restaurants stir in a tablespoonful or two of crème fraîche to enrich and extend the sauce. It may not be traditional, but it’s a very pleasing addition if you want a little luxury and you don’t mind the extra calories.