December 07, 2013
The Malakoff torte is a refined item of patisserie, which allows the more experienced and skilful dessert maker to show off his or her talent. But we're not going there. Instead we're going back to 1970s England where a much less refined and more relaxed dessert with a vaguely similar set of ingredients turned up on the menus of a number of restaurants. Sponge fingers, cream mixtures, perhaps some almonds or chocolate and plenty of rum were piled into colourful dishes and plonked in front of grateful punters. Being the 1970s, it was a seriously rich and indulgent dessert but it was also a seriously tasty one. Shortly afterwards tiramisu became fashionable and, following a brief but gooey skirmish, the Malakoff Trifle was history. (Actually, it may not have been called a ‘trifle’ at the time - I can only remember the Malakoff bit of the name).

This is my tribute to that abandoned dessert. I've made it a little lighter by not using buckets of whipped cream, although I'm not pretending that this is diet food. I've used a combination of quark and fromage frais as the ‘cream’ layer here because it gave me the texture I was looking for but you could use just fromage frais or even yoghurt. I've also cut down on the booze content, although it still has a distinct rum flavour. Nobody cared much about excess booze or fat in the 1970s.

You can either put this together in a single attractive dish and spoon out as much as you fancy or make individual desserts, which is a little bit fiddly but appealing. It should produce 4 individual desserts but I got carried away and made 2 larger ones. Since this is quite rich, if you do make 2 larger desserts, then I think you should supply 2 spoons per dessert and suggest sharing. After all, these days we do worry about excess. 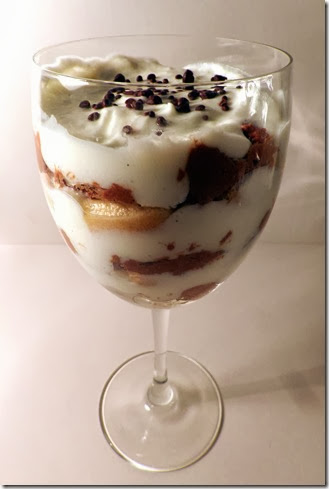 Cream the butter and the icing sugar together thoroughly. Beat in the egg yolk. Melt the chocolate, allow it cool a little and beat that in as well.  (If you make this chocolaty cream ahead of time, store it in the fridge, but let it warm up a little before assembling the dessert).

Mix the rum and milk together in a shallow dish. Break each sponge finger into 3 or 4 pieces. Dip a few pieces of sponge finger in the milk and rum mix. Don’t leave them there too long – you don’t want them to collapse completely and turn to mush. Place the soaked sponge in the bottom of a small dish or glass. Spread a layer of the chocolate butter cream over the sponge, pressing it down a little to fill any gaps. Top this with a layer of the fromage frais mixture. Dip some more sponge finger pieces and repeat the process of creating the layers until you get near the top of the dish or glass and finish with a layer of the fromage frais mixture. If you make this in a single, larger dish it might be easier to avoid trying to create too many layers – it can get a bit messy. The idea is that the chocolate butter cream will be a relatively firm layer around the softer sponge with a lighter fromage frais mixture between or on top.

Decorate the top fromage frais layer with grated chocolate or try sprinkling on some chocolate-coated popping candy for a bit of a change. Keep in the fridge until needed but take it out fifteen or so minutes before serving.

December’s We Should Cocoa challenge hosted by Choclette of Chocolate Log Blog asks us to combine chocolate and alcohol. I think this should fit the bill pretty well in a retro kind of way.

Chocolate Dessert We Should Cocoa