February 28, 2014
I'm sure you don't need me to tell you that today is Global Scouse Day. In celebration, here's an alternative dish from Liverpool - sort of. A while ago I read this post about the Wet Nelly of Liverpool on the very fine blog Lola and Finn’s Mum. Shamefully, despite a shedload of visits to Liverpool, I'd never heard of Wet Nelly. While I was back there last year and cruising along Speke Boulevard at the regulation 40 mph with the wind from Widnes blowing through what remains of my hair, I suddenly remembered Wet Nelly and thought I must have a go at making one.

It turns out that Wet Nelly is essentially bread pudding from Liverpool. It might have pastry on the top and bottom and, then again, it might not. I don’t think that there’s any doubt that it’s one of those puddings designed to use up whatever you have left in the cupboard when there’s not much money to go around. I can remember eating bread puddings made from various leftovers as a kid (in London not Liverpool) but I have to admit that they were moderately terrible. So I was keen to see what would happen if I made one now.

I'm a fully qualified southern softie and I just don’t have the same sort of leftovers these days that we had when I was young. Looking round the kitchen, I had leftover brioche, some speculoos biscuits (or Biscoff, as they seem to be called in the UK these days) and butter rather than suet. (When did I become so ridiculously middle class? I think I'm becoming unduly influenced by Damien Trench.) Anyway, this is my attempt at a Southern Wet Nelly or slightly eccentric (and probably woollyback) bread pudding. As it turns out, there’s nothing at all wrong with that idea and the result is so much better than anything I ate as a kid. In fact, it’s decidedly moreish.

One more thing, in Liverpool I was told that Wet Nelly should always be cut into squares before serving. No other shape would be right. I advise against asking why that should be, you might well get the answer, ‘Act soft and I’ll buy you a coalyard’. 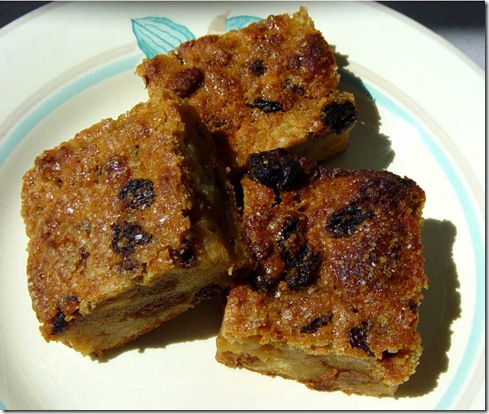 You don’t have to use rum to soak the sultanas - orange juice, black tea or even water will do. On the other hand, if this dish is a tribute to Nelson as historians suggest, then I'm sure that he would have chosen rum and so would I. If you use stale bread to make this dish, it will probably need some additional soaking time. Brioche is normally softer and needs only 10 minutes or so.

Preheat the oven to 170°C. Butter an oven tray or cake tin – I used an 18 cm square tray with a depth of 5 cm. Break the speculoos (or other biscuits) into random chunks. (I put mine into a plastic bag and bashed them on the worktop a few times.) Add the sultanas and any residual rum to the soggy brioche, then add all the other ingredients, except the demerara sugar. Stir the whole lot together thoroughly. Pour into the prepared tin and sprinkle over the demerara sugar.

Bake in the preheated oven for about 40 – 45 minutes until the top is browned but not burnt and the pudding feels springy but reasonably firm. You can either cut the pudding into squares and serve immediately with some custard or allow it to cool and reheat later (a microwave will do the job fine, although Mr Trench might disagree). Or, if you're like me, just eat it cold whenever the urge takes you.
Britain Dessert