October 06, 2014
I'm lucky enough to live only a short distance from the Royal Horticultural Society garden at Wisley. Towards autumn they often sell some of the fruit grown in the garden and that means a chance to try some of the more traditional and rare varieties that you’ll never find in a supermarket. And that’s how I ended up with a fine bowlful or two of apples and pears. With that much fruit on hand, I thought that a flognarde might be called for. 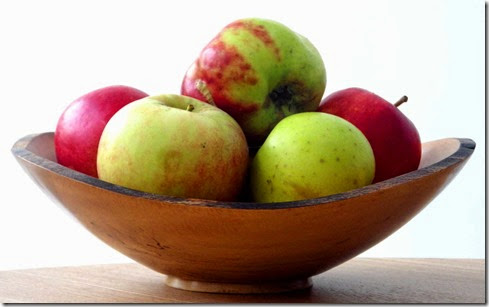 I've come across some versions of this dessert that seem like an attempt to make uninspiring apples a bit more interesting. But if you start with interesting apples or pears, then it’s so much better than that. The flognarde (or flaugnarde) appears to have started life in the Limousin region of France, although it turns up in other places such as the Périgord too. You might be tempted to ask what’s the difference between a flognarde and a clafoutis with apples in it, but please don't - that question gives me a headache.

There's a little drop of rum in this recipe and I know that will put some people off. Rum just doesn't seem to be a popular flavour these days. You could leave it out altogether or substitute some calvados but please try the rum if you have some lying around because it adds a lot to the overall taste in my very biased opinion.

I used a 24 cm square tin that was sold as a Yorkshire pudding tin on this occasion. This size will give quite a thin centre to the flognarde, but that’s the way I like it (and the way that I first came across it). Some people like a thicker result and so use a smaller tin if you prefer. Don’t use a loose bottom or springform tin, though, because the batter is thin and likely to leak. 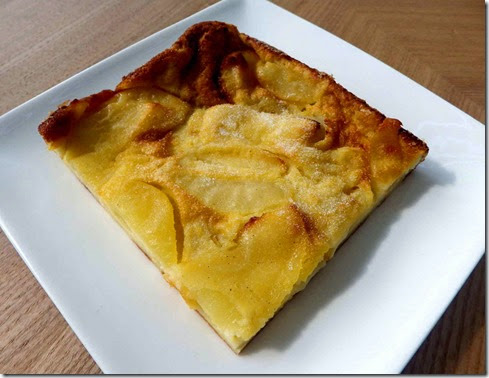 I reckon that this will serve 8 people but 6 is more realistic if you have hungry friends.

For the fruit:
30 g butter
2 - 3 tbsp caster sugar (depends on how sweet your apples or pears might be)
4 apples or a mixture of apples and pears - peeled, cored and sliced

Melt the butter in a frying pan, add the caster sugar and the apples or pears and cook gently for five minutes or so. Stir now and then to ensure that the fruit is coated in buttery juices but don’t allow it to break up. Set aside.

Preheat the oven to 180ºC. Butter a suitable pie dish or oven tray (see above) and coat with a light dusting of caster sugar. Mix the sugar and flour together in a large bowl.

Whisk the eggs, vanilla paste, melted butter and rum together and then whisk this mixture into the flour and sugar mix. Gradually whisk in the milk, while doing your very best to avoid any lumps. Stir in the apples (or whatever fruit mixture you’re using). (If there’s a lot of juice, then you don’t need to add it all). Pour the mixture into the prepared tin or dish.

Break the softened butter into small pieces and dot them over the top of the batter. If you can, avoid putting any of the butter too near to the edges of the tin.  Bake in the oven for around 30 minutes. The centre should be set, but still soft and the top should be browned in places, especially at the edges. (Personally, I think the slightly crisper edges are the best bit).

Sprinkle with an additional tablespoon or two of caster sugar as you take it out of the oven. If you’re serving this hot from the oven then it’s best cut into pieces before removing from the tin. If not, allow the flognarde to cool in the tin and then the whole thing can be lifted out carefully and divided up appropriately.

This dish is usually served hot, ideally straight from the oven, but I think it’s also pretty good at room temperature or even chilled. A little crème fraîche or cream would be nice alongside, but it’s not essential. I know that some die-hard flognarde fans even like a room temperature slice for breakfast the next day and, actually, I reckon that’s not a bad idea. 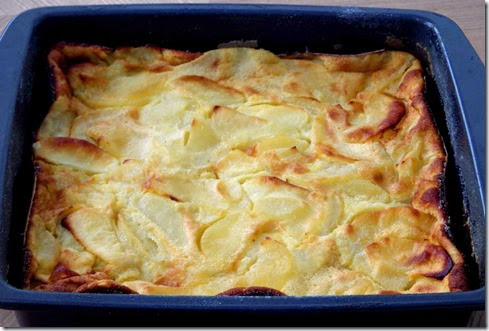