June 01, 2015
When it's in season I never really get bored with simply cooked asparagus but, just for a change, I do use it in some slightly more involved recipes. I've often made a simple asparagus risotto in the past but this year I've played around with different flavours that complement and enhance the asparagus.  Almond milk provides a good background flavour and gives the risotto a creamier texture.  It might sound odd but I think that a little ginger in the stock intensifies and highlights the taste of the asparagus.  Don’t overdo the ginger, though, or you won’t taste much else. The easiest way to create a little ginger juice is to squeeze about ½ - 1 inch of peeled fresh ginger in a garlic press; although you could use a commercial ginger extract instead.

I served this risotto with a little jamón ibérico (I do mean a little - I can't afford a lot) and a small, simple salad of red pepper. I love both of those flavours with asparagus but in a way they're just icing on the cake and the risotto will stand on its own slightly sloppy feet perfectly well.

I feel I should apologise for specifying yet again how to make a risotto. I do pretty much the same as everyone else so there's nothing stopping you using your own method or a risotto machine if you have one. The ratio of liquid to rice given here is only a guide. The exact amount of liquid needed will depend on the type of rice, how quickly you cook it and, of course, the texture you prefer in the finished dish. 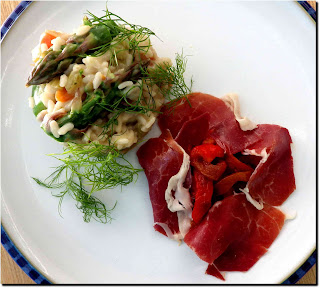 1 red pepper
About ½ onion, chopped quite finely
1 medium-sized carrot, cut into small dice
1 stick of celery, chopped quite finely
A small glass of white wine
120 g carnaroli (or other risotto) rice
300 ml vegetable stock
700 ml unsweetened almond milk
A small bundle of asparagus (6 - 8 spears, depending on their size)
About ½ tsp of ginger juice (see above)
A small handful of fennel fronds
White balsamic vinegar to dress the pepper
A few small slices of jamón ibérico, or another cured ham

Fry the onion, carrot and celery very gently in a little oil until they soften. While that’s happening, mix the stock, almond milk and ginger juice, heat to simmering point and keep at a gentle simmer.

Pour the wine into the softened onion mixture, turn up the heat a little and, when the wine has has almost disappeared, add the rice and stir around. (It's more usual to add the wine after the rice but lately I've been following Simon Hopkinson's advice and not allowing the rice to absorb the flavour of the raw alcohol). Add a ladleful of the simmering stock and almond milk mixture to the rice and stir until the stock is pretty much absorbed. Repeat a ladleful at a time until the rice is fully cooked and the texture of the risotto is to your liking.

While that’s going on cook the asparagus (I usually steam it, but boil or grill if you prefer), then cut into bite-sized chunks. When the rice is ready, stir in the asparagus pieces and about half of the fennel fronds. Add some salt and pepper but don't overdo the salt if you’re serving with salty ham and use white pepper if you want to avoid seeing specks of pepper (personally, I don't really care about specks).

To serve, dress the red pepper with a little white balsamic and put a small pile on each plate. Surround with the jamón ibérico. Put a portion of the risotto alongside the pepper and ham and sprinkle on the remaining fennel fronds.
Almonds Asparagus Rice