March 21, 2016
I've posted a recipe for this classic cake before but there are probably almost as many recipes for pain d'épices as there are people who make it so why not another one? It's such a useful cake to have around. You can eat it any time you fancy on its own or with some jam or marmalade (I like a slice at breakfast time) but it can also be eaten with pâté or even cheese. When you've had enough of that, you can use it to thicken and flavour casseroles (such as Carbonade ) or whiz into crumbs and use them to flavour crumbles or as a coating for fried or baked meats, cheeses or even fish.

There's a wide variation in spices between pain d'épices recipes and I've decided that there's very little point in trying to be authentic because I'm convinced that nobody really knows what the authentic spices should be. For me a little aniseed gives the characteristic flavour of this cake but, on the other hand, my use of cardamom might be seen as a bit of an eccentricity. In France you can buy pre-mixed pain d'épices spices, which avoids arguments I suppose. Whatever spices you choose, though, I think it's best not to overdo it or you'll lose the honey flavour.

The type of flour used for pain d'épices can also vary widely but will more often than not be a combination of rye and white or wholemeal flour. I've used just wholemeal here simply because I like the result. I also add a little brown sugar to the cake because I think it enhances the flavour and because that's the way I first learned to make it. Many people would insist that the genuine, traditional pain d'épices should be sweetened only with honey.

This type of cake is open to all sorts of variations and a while ago Snowy of Cookbooks Galore posted an unusual and luxurious version using dark chocolate which is well worth checking out. 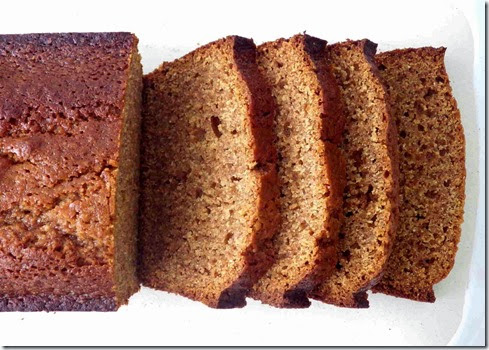 Preheat the oven to 160°C. Butter a 2 lb (900 g) loaf tin thoroughly. You could also lay a strip of baking paper along the length of the tin allowing the ends of the paper to stand proud of the tin a little. This makes lifting the cake out of the tin a little easier. Crush the aniseed and cardamom seeds in a pestle and mortar.

Pour the honey and the milk into a saucepan and heat very gently while stirring until they’re combined. Cut the butter into small pieces and add to the honey mixture with the sugar. Stir until the mixture is smooth, take off the heat and set aside to cool a little. (Be gentle with the amount of heat that you use in this stage – overheating the honey seems to spoil the flavour).

Sift together the flour, baking powder and spices. Stir the egg and the orange flower water into the honey mixture and then stir the liquid into the flour until smooth. (It’s easiest to do this by placing the flour into the bowl of a stand mixer if you have one and adding the liquid gradually with the motor running.)

Pour the mixture into the prepared tin and bake for around 55 minutes. Check that the cake is done in the usual way with a knife or cake tester but because the mixture is very sticky, don’t expect the tester to be quite as clean as with many other cakes. Because of the high sugar content the top of the cake will darken quite significantly. Some bakers prize this dark (well, burnt looking) top as an additional taste and texture but personally I don’t like it to get too dark and I cover the tin loosely with foil after the first 15 or 20 minutes.

Allow the cake to cool in the tin for around 15 minutes before lifting out and letting it cool completely on a wire rack. The cake should really be allowed to mature for at least a day in an airtight container before eating, although I usually sneak a slice before that. It will keep well in its container.
Cake France Honey