March 09, 2017
I was reminded of this dish while meandering along the back alleys of some old cookbooks. It's a variation on cottage pie and the most obvious difference is that you don't usually get fruit in a cottage pie. I don't know the exact history of this recipe but I'm sure that this pie was around in some form during the period of rationing after the war. At that time small amounts of meat were often mixed with any available veg and fruit to make it go further. I can remember eating something like it in the 1970s but it seemed to fade away around the end of that decade. Meat combined with fruit has a very long history in British food and is common enough now in more fashionable, imported dishes so I thought I'd try a personal London Pie revival. 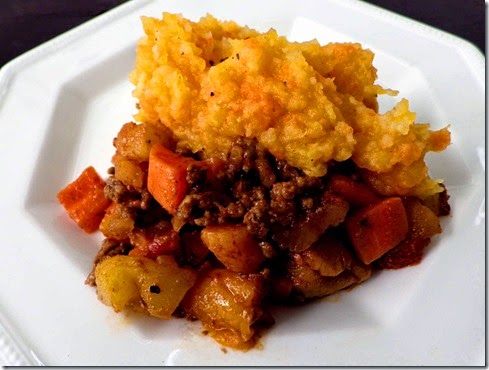 Less sweet varieties of apple are best for this recipe in my opinion and I've used both cooking and eating apples to give a contrast in texture. The sour quality of the apples is offset by the dried fruit and the sweetness in the topping. A pure potato top would be much more traditional but this variation is sweeter, lighter and adds a bit of colour. I've used types of dried fruit that I like and that I happened to have in the cupboard but other types would work just as well.

Of course, the flavourings I've used aren't typical of the 1950s, especially not the chilli sauce or the cumin, but they're what you might have lying around the place in these non-rationing days. Unless you really love chilli it's probably best to use a mild chilli sauce - I used one that I picked up in The Little Chilli Shop on Anglesey and that's well worth a visit if you're in the area. This will serve 2 pretty generously. 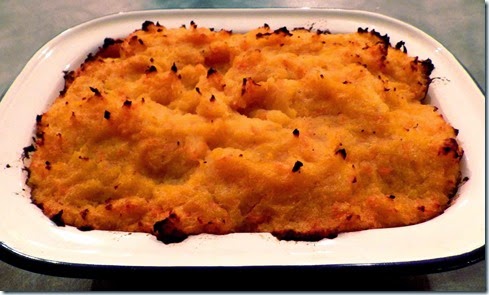 For the topping:
2 potatoes, medium or large
350 g butternut squash flesh in chunks
3 tbsp mango chutney
A squeeze of lemon

Start the onion and carrot frying in a little oil then add a couple of tablespoons of water to the pan. Keep cooking until the water has evaporated then stir in the beef. Fry until coloured then add the apple, dried fruit, cumin, chilli sauce and Worcestershire sauce. Season with salt and pepper, add around 4 tablespoons of water (you need the dish to be nicely moist rather than swimming in water), cover the pan and cook gently for around 25 minutes. If your apples are not sharp then add the sherry vinegar. Remove the lid and continue cooking until any excess liquid has evaporated but the mixture is moist and all the ingredients are cooked through.

While the filling is cooking, prepare the topping. Peel and chop the potatoes and steam (or boil) along with the butternut squash. When they're both softened, drain thoroughly and mash. (I use a potato ricer because I find that it’s easier to get rid of any excess moisture that way but it's just a personal preference.) Once mashed to your liking, season with salt and pepper, stir in the mango chutney and the dash of lemon juice.

Place the filling in your chosen ovenproof dish and top with the mash. I prefer to leave the mash looking a little rough on the top. (You could dot with butter if you don’t mind the extra fat). If you want to make the dish in advance then you could chill it at this stage until ready to cook or, probably better still, chill the filling and topping separately.

Preheat the oven to 180ºC. Bake in the oven for around 30 minutes (you may need a little longer if the mixture is chilled) or until it’s thoroughly hot throughout and the top has a little bit of brown here and there. Personally, I don’t think you need anything with it, but a little green veg will give a nicely contrasting colour.
Apple Beef Britain Historic Recipe