May 22, 2017
OK, I admit that some people would rather eat gravel than herrings but I love the little silver darlings and this dish is my way of celebrating some of the excellent marinated herrings produced in the UK. At one time the marinades plonked on this poor little fish could be used as an alternative to paint stripper but the products from some of the smaller suppliers today are a completely different kettle of herring. (You could create your own marinated herring and that would be a wonderful thing to do but I'm assuming that time isn't hanging heavy on your hands.) For this salad you need a good quality marinated herring without any overly strong flavours. A simple dill or light mustard marinade would be perfect. 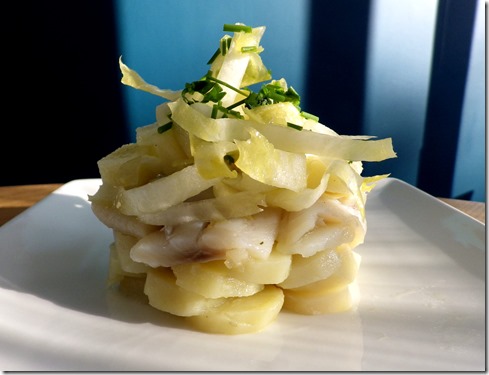 This is actually a little offering from my Dieppe days. Le Pollet is the traditional fishermens’ quarter of Dieppe where old sea dogs sit mending their nets and telling colourful tales of life on the unforgiving sea. Actually, it may have been like that once when Walter Sickert prowled the area with paintbrush in hand and a lustful glint in his eye but those days are long gone.

The traditional food associated with Le Pollet is a dish of herring and potatoes. There's nothing wrong with that simple combination but you'll find much more elaborate versions of the salade in the upmarket restaurants and hotels around Dieppe. This is my attempt at a more refined but still straightforward version. You'll need a vinaigrette, some new potatoes, some marinated herring, chicory (or endive, if you prefer a more French sounding name), apple and some chives and parsley. I think it makes a very pleasing and, hopefully, impressive starter or lunch dish for remarkably little effort. I haven't given precise quantities here, because it's better to decide on the balance of flavours and amounts according to your personal taste and the size of appetites you're faced with. 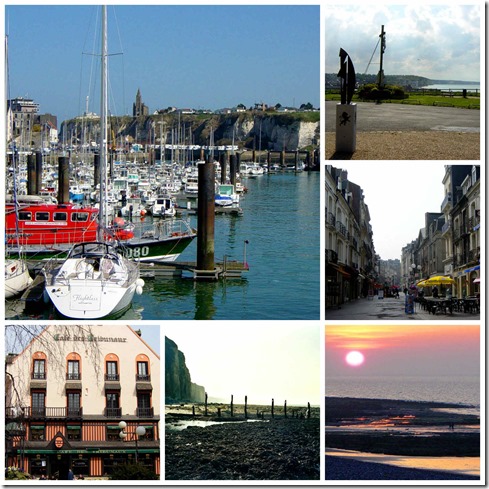 First make a vinaigrette using the usual proportions of 3 to 1 oil to white wine vinegar with a little salt and pepper and for this dish add a small amount of Dijon mustard to the mixture. I use a combination of light olive and rapeseed oil but any neutral oil would do the job. It's probably sensible to make a little more vinaigrette than you think you might need, because warm potatoes have an impressive ability to soak it up.

Boil or steam some new potatoes. In Dieppe they'd probably be Ratte or Charlotte but if Jersey Royals are in season then I would use them. You don't have to peel them but I definitely would. Once they're cooked and as soon as they're cool enough for you to handle without damaging your fingers, slice them into rounds or small chunks and pour over some of the vinaigrette. Leave to cool.

Slice some chicory quite finely. (You could use another salad leaf if chicory isn't available but it should be reasonably crisp and just a little on the bitter side). Peel a crisp, eating apple or two, cut into smallish dice, place in a bowl with the chicory and mix in more of the vinaigrette. (Don't leave the apple sitting around too long without dressing or it will lose its youthful looks). Chop a generous number of chives together with a little parsley if you have some.

Now you just need to combine the lot. I make it into a fancy little stack but you really don't have to do that unless you're desperate to impress someone. Arrange a layer of potatoes, top with some of the herring that you've drained and cut into bite-sized pieces. Add a layer of the chicory and apple mix and sprinkle over some of the chopped dill and parsley. Don't overdo the amount of apple and chicory in the final dish or it might swamp the other flavours. If you were in Dieppe you'd probably get some baguette with this but I must admit that I prefer a slice or two of buttered wheaten bread. 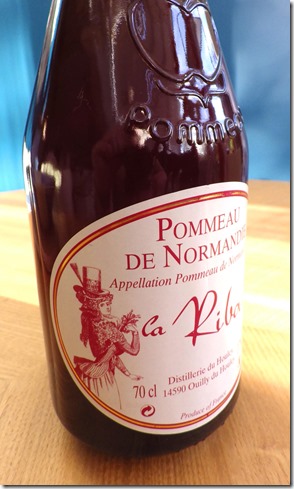 If you want to get the whole experience then try a small glass of Pommeau as an aperitif and maybe even a little Normandy cider alongside the dish. You could also imagine that you're sitting in a restaurant on the Quai and hummng a De Palmas tune. (Sorry, I got a bit carried away for a moment there.)
Apple Fish France Salad