December 13, 2020
If I ever get round to inventing a time machine then I'll probably revisit any year from the 1980s rather than live through 2020 again. So for this Christmas season I'm looking back to the decade "when the frocks went posh" (as the estimable Cleaners from Venus say). I'm offering versions of both a sauce and a side dish from the 80s that would be useful at any time of the year but will be just perfect alongside Christmas leftovers. So make a note of them in your Filofax, blow the dust off the Lloyd Cole album and I'll see you down at the wine bar later.
First, the sauce....

This cold sauce is very easy to put together. It can be served in generous amounts to complement a main course or in smaller dollops as a condiment in a similar way to tartare sauce. I remember it being served mainly with fish and fish terrines but it also works well with turkey, chicken or vegetable dishes. Grelette sauce was created (I think) by Roger Vergé but there were many different versions around throughout the 80s - this certainly isn't the original recipe.
I've listed chervil in the ingredients but that can be a bit tricky to get hold of so leave it out if you can't find any. If you want to avoid alcohol, then you could leave out the brandy too, but it will make a significant difference to the flavour. I use yoghurt in the sauce these days, but in the immoderate 1980s it would've been cream. 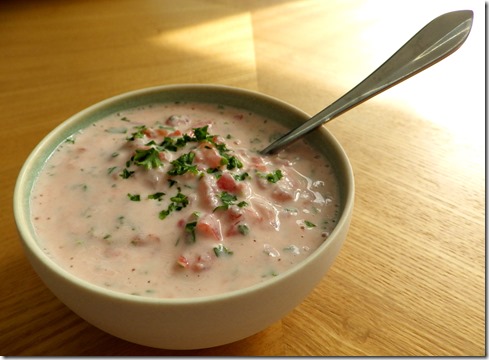 I put the tomatoes into boiling water for a short while to make the skinning much easier, but if the tomatoes are really ripe and fresh you may not need to bother. Either way, once you've got enough chopped tomato flesh, let it drain in a sieve for a few minutes. Then simply stir all the ingredients together thoroughly with some salt and pepper.

Taste and adjust the seasoning. The sauce should be a little piquant, but if it's too sharp then mix in a pinch or two of icing sugar or whatever sweetener you prefer.
And now, the side dish.....

This might seem like a lot of faffing about for some cooked onions but I promise I wouldn't be telling you about this recipe if it didn't make the poor, undervalued onion taste really good. Frédy Girardet, who has to be one of the great chefs of the 20th century, published a recipe for onion confit back in the early 1980s and the dish was copied and adapted in many British restaurants, such as the fondly remembered Carved Angel. This recipe isn't quite faithful to the Girardet original nor to the British variations but it's what I do nearly 40 years later.
This confit was often served warm alongside refined meat or game dishes but it also works really well with good quality sausages or leftovers if you're less refined like me. It's also pleasing served cold with pâté or even added to a meaty (possibly, turkey) sandwich.
You could replace the grenadine with a little sugar or sugar syrup but grenadine adds a slightly more interesting flavour and enhances the colour, if you happen to have some to hand. By far the best grenadine you could use would be homemade; it's not tricky to make as long as you can find good pomegranate juice, but I realise that there are other priorities at this time of year. 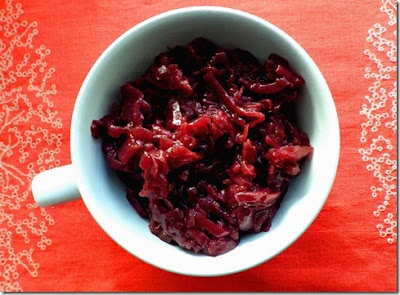 As a side dish, this will serve 4 but it will stretch to 6 if you use smaller, tasteful dollops.
700 g onions, thinly sliced (Roscoff onions would be ideal, if you can find them)
The zest of 1 large orange
500 ml red wine
140 ml red wine vinegar
500 ml vegetable stock (or just use water if you prefer)
2 tbsp heather honey (other honey will be OK but heather honey is especially good)
2 tbsp grenadine
1 tbsp good olive oil
Place the onions in a large saucepan with the orange zest. Pour over the wine, vinegar and stock, place the pan on a medium heat and bring the mixture to a simmer. Turn the heat down and continue to simmer uncovered, stirring regularly until virtually all the liquid has disappeared. This won't be a quick process, so allow around 90 minutes. (You only need to watch it very carefully towards the end, so feel free to do something more useful for a while).
At the end of this time the onions should be meltingly soft and an interesting shade of red. Stir in the honey, grenadine and olive oil. Season well with salt and pepper. (Most of the recipes from the 1980s would add a fair bit of butter at this stage, but I prefer it without these days).
If you're not using it immediately, then chill the confit until needed. To serve, reheat gently and consider adding a squeeze of lemon juice to freshen the flavour.
Fish Honey Onions Sauces Tomatoes