July 29, 2019
Please don't imagine that this dish is authentic. Let's just say that it's inspired by the Catalan dish ‘samfaina’, which is itself a cousin of ratatouille and caponata. Over the years I've heard many chefs insisting that the flavours and textures of the vegetables in ratatouille should always be kept distinct from one another but for this slow-cooked style of samfaina please forget about that. This dish is all about blending the flavours and textures into something closer to a jammy dip. That may sound odd but, believe me, it works.

I have it on good authority that courgettes aren't normally used in the classic Catalonian samfaina but I like what they bring to the dish. (I warned you that this wasn't authentic.) The addition of smoked paprika to the dish at the end isn't really authentic either but I came across a restaurant doing something similar and so I've copied the idea. It makes a subtle but very real difference to the flavour. (A little warning from someone who should know better - I tried a cheap supermarket brand of smoked paprika recently and it tasted very nasty indeed compared to the imported Spanish product. It seems that you get what you pay for).

This version of  samfaina makes a fine sauce alongside fish, chicken or pork and, although it's commonly served hot (or at least warm), it also makes a very pleasing condiment or dip at room temperature. It's not half bad as a sauce for pasta or rice too. It can be prepared well in advance and freezes very well. In short, it's just ridiculously useful. 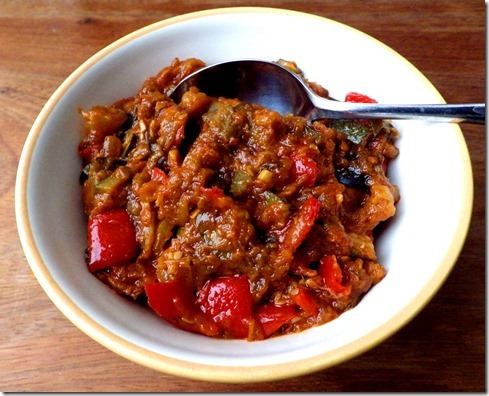 Once the vegetables have been chopped, there's not a lot of work involved in this dish but it does take a while to cook and it's best made when you're not due somewhere else for a while. Don't worry about being too precise with the veg chopping; it's a rustic dish. This will serve at least 4 or 5 people but more if you use it as a dip or a smaller side dish.

I wouldn't normally bother to salt aubergines before cooking them but if they're prone to being bitter and watery in your neighbourhood then it might be a good idea. So, if you think you've got watery aubergines, sprinkle salt on the aubergine chunks in a colander and leave them to drain for 30 - 60 minutes. Wash the salt off and dry the aubergine chunks before using.

Using a pan that will be big enough to hold all the vegetables eventually, fry the onion very slowly in a few tablespoons of olive oil until they're very soft and taking on a little colour. That should take around 30 or 40 minutes if you're being thorough.

While that's happening, coat the chunks of aubergine with another tablespoon or two of olive oil and roast in the oven at 180⁰C for about 20 minutes until softened and lightly coloured. (It's more usual to fry the aubergines but I prefer to roast them initially because they soak up far less oil). Do the same with the courgette chunks but roast for a slightly shorter time: 10 - 15 minutes should be enough.

Once the onion is truly soft, add the garlic and peppers and continue frying gently for 5 minutes. Add the roasted aubergine and courgette chunks to the pan, stir in the white wine followed by the tin of tomatoes and the tomato purée. Season generously, stir well and bring to a simmer. Cover the pan and allow the mixture to simmer gently for an hour. Stir the pan every now and then and make sure the contents don't dry out (add a little water if it seems to need it).

After an hour or so the vegetables should all be very tender and almost falling apart. Uncover the pan, increase the heat and stir until the contents of the pan are thick and almost jammy. Take the pan off the heat and check the seasoning - the dish will be all the better for quite a lot of seasoning. Finally, stir in the sweet smoked paprika.