November 22, 2019
I've called this a gâteau because that's what the French original was called but this is definitely a dessert (or maybe a sweet snack) and not a cake to be nibbled with tea. The French seem to have a great love for flan-like desserts of various kinds such as the classic flan pâtissier,  le millas made with maize flour from the Charente or maybe the pastizzu made with semolina from Corsica. This dish may follow that tradition but it's a modern and health-conscious invention. I've come across it in many forms in the last 20 or 30 years and I've always been a bit doubtful about some of the simpler and lighter forms of the recipe. 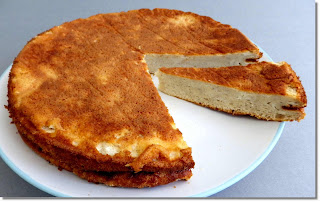 In France this would be made with fromage blanc, but in the UK we have fromage frais. The difference between French fromage blanc and British fromage frais is confusing, a bit dull and not really all that important for this kind of recipe. The type of fromage frais you choose does make a difference, though. Personally I think the low fat content of this recipe is a major part of its appeal and so I use a 0% fat fromage frais. A fromage frais with higher fat content will taste a little richer and should prevent the gâteau collapsing quite as much. It's really a question of taste.

I use vanilla in this gâteau but it will work very well with other flavours too. Lemon is a good alternative (use lemon zest and a little juice) but I've also come across examples with orange flower water and the odd touch of Cointreau or rum. I combine plain flour with a little potato flour in this recipe which I think gives a slightly lighter result but it's not critical and you could use all plain flour. 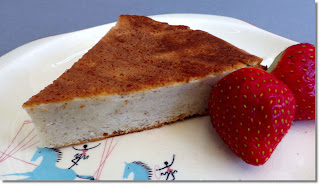 Prepare a 23 cm tin by rubbing it thoroughly with butter and sprinkling evenly with the 2 teaspoons of sugar. (It's not vital, but I find a springform tin easiest). Preheat the oven to 180⁰C.

Whisk the sugar and egg yolks together thoroughly until pale and increased in volume. Briefly whisk in the fromage frais and vanilla powder (or paste or extract).

Whisk the egg whites to the stiff peak stage. Fold the egg whites into the fromage frais and egg yolk mix. I find it's best to add the egg white in two stages but, however you do it, don't be too vigorous and knock out all the air. If in doubt remember that it's better to have a less thorough combination than a flattened one. Pour into the prepared tin and even the mixture out. Place in the preheated oven.

The time this gâteau takes to bake will vary according to the thickness of the chosen fromage frais but around 30 minutes is about right. Check after around 25 minutes but don't be surprised if it takes closer to 40 minutes. When baked, the top should be browned, the gâteau should feel springy to the touch and if you test with a knife point or a cake tester, it should be largely clean (a little stickiness is not a bad thing).

Allow the gâteau to cool completely in the tin before turning out (it will sink as it cools, but that's OK). You could smarten up the top of the gâteau by sprinkling with icing sugar but I quite like the crusty look and so I don't bother. Keep in the fridge until ready to serve.

Serve in slices with berries or a fruit coulis or purée. I like it served cold from the fridge but most people seem to prefer it served at room temperature so remember to to remove it from the fridge in advance. Any leftover slices will freeze well.