June 03, 2020
It's been easier to buy less common ingredients than basic cupboard essentials during the recent strange days. Flour has been the most difficult item to find in my tiny corner of the world. Fortunately, I could find gram flour and I used it to make onion bhajis and socca and, because I like a simple life, I always make very straightforward versions of those treats in the oven.
It might be useful at this point if I try to be quite clear for once in my life: when I say gram flour, I'm talking about chickpea flour. In the UK most chickpea flour seems to be sold as gram flour, unless it's ‘farina di ceci’ imported from Italy. There is technically a difference between gram and farina di ceci but for these simple recipes that shouldn't really matter. It's also possible that you might find chickpea flour called ‘besan’. Once again there is technically a difference between besan and gram flour but the same product is often labelled with both names in this country so let's not worry about that either. One brief warning, though: I've occasionally come across products called besan which aren't made purely from chickpeas. They might still be fine for these recipes but I can't be sure and, if it's important to you, check that they're genuinely gluten free. Lecture over - back to the matter in hand.
Socca
This oven-baked version of socca is exceedingly simple but very adaptable. Small pieces work well in a salad as a softer style of crouton, larger pieces are good as a base for savoury bites of all sorts (I used it as a base for black pudding here), random pieces can be used as a snack or as part of a mezze and, best of all I think, neat little squares are just perfect with an aperitif or a cocktail. I truly love a nibble with my negroni. My favourite flavouring is fennel but you can use an alternative such as rosemary or cumin should you so desire. 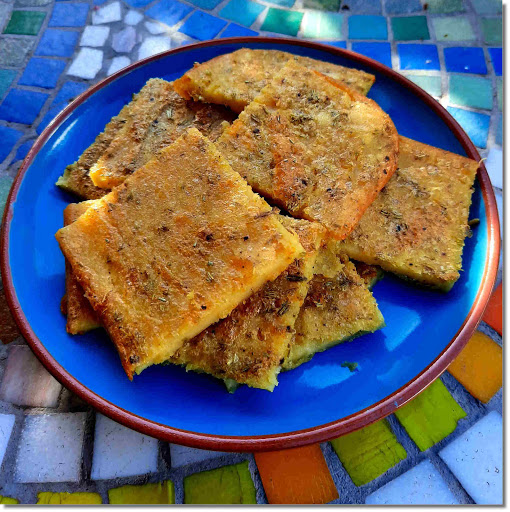 This should make enough to use as part of a meal for 2 people or cocktail nibbles for 4. Remember to start this ahead of time because the batter needs to rest for an hour or more.
100 g gram (chickpea) flour, sifted to remove any lumps
½ tsp salt
250 ml water
2 tbsp olive oil
2 tsp fennel seeds, crushed
½ tsp black peppercorns, crushed
Put the gram flour in a bowl and sprinkle over the salt. Pour in the water in a steady stream while whisking the mixture until you get a thin, smooth batter. Cover the bowl and leave it to rest at room temperature for between 1 and 3 hours.
Preheat the oven to 200°C. Pour the olive oil into a 21 cm square tin (or equivalent) and place in the oven for 5 minutes. Stir the fennel seeds and black pepper into the batter. Remove the tin from the oven, quickly pour the batter into the tin and return it to the oven for 15 minutes until the socca seems stable and has browned a little around the edges.
Leave to cool in the tin for 5 minutes before removing as carefully as you can with a spatula. Serve warm or cold.
Onion Bhajis
Onion bhajis are normally deep fried, of course, but my version is baked not only because it's healthier and a lot less of a faff and but also because I actually prefer the result. I like to cook the onions quite thoroughly before adding them to the bhaji mixture but this isn't usual, so halve the onion frying time if you prefer a bhaji that's closer to the restaurant version. Treat the choice of spices here as a suggestion and adapt them to your taste. 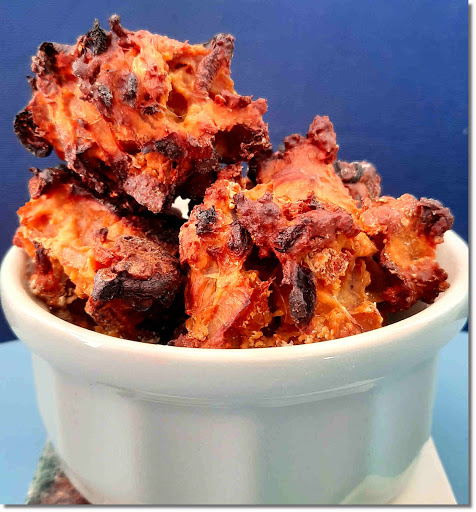 Serve these warm with pickles or chutneys as a starter for 2 people or an appetiser for 3 or 4 or with salad and other spicy nibbles for lunch. They're also good served cold as a snack, maybe with some cold beer should you be lucky enough to find some sport to watch on TV.
2 large or 3 medium onions, peeled and sliced fairly thinly
150 g gram (chickpea) flour, sifted to remove any lumps
3 cm (a little more or less is no big deal) ginger, peeled and grated
1 tsp ground cumin
1 tsp ground coriander
1 tsp ground chilli powder
½ tsp ground black pepper
½ tsp garam masala
½ tsp turmeric
½ tsp salt
Fry the sliced onions in a little oil over quite a low heat for 20 minutes or until the onions are soft and taking on a little colour. Preheat the oven to 180°C.
Put the onions in a bowl and stir in the gram flour, the ginger and the spices including the salt and pepper.  Add 1 tablespoon of water and stir in. You want to add just enough water for the mixture to come together and so, if you need to, add another tablespoon (or maybe two) of water and stir again. Form the mixture into small, irregular blobs, roughly the size of golf balls or a little smaller, and place them on a non-stick or lined oven tray. You can vary the size of the bhajis to suit your tastes but you should get at least 10.
Bake in the oven for around 20 minutes until the exterior of the bhajis is a little crispy and nicely coloured. If you want a crisper or crunchy exterior that will contrast well with sauces or dips, then leave them in the oven for another 5 minutes.
Chickpeas Fennel Onions