October 05, 2010
Sloe gin is a peculiarly British drink. The French normally gather anything suitable for human consumption from the wild but when I was in the Mayenne earlier this year and suggested that sloes were worth picking I got some very strange looks. So I suppose I’m peculiarly British since I've been making it for quite a few years now. Here's what I do. 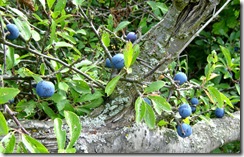 First collect your sloes. You want the sloes to be ripe – a nice deep colour with a distinctive bloom on them. You don't have to wait until the first frost, as some people say. (Some years the sloes don't seem to ripen well at all if the summer's not good. You can still make sloe gin with a decent taste in those years, but the colour will be less appealing).

Once you've gathered a goodly number of sloes, take them home and wash them. Drain them thoroughly, pick them over and throw away any that look nasty in the cold light of the kitchen. Get a large, clean jar with a lid that will seal tightly – I use large French-style Kilner jars. Weigh the jar empty and make a note of the weight.

You need to pierce the skins of the sloes before adding them to the jar. Traditionally this involved pricking them with a silver pin, but the tip of a stainless steel knife will do just fine. Alternatively, you could try freezing the sloes for 24 hours or so before using them – this should damage the skins sufficiently and remove the need for the boring pricking bit.

Now top the jar up with gin – a decent, neutral flavoured gin is best. Some of the more expensive designer gins will be 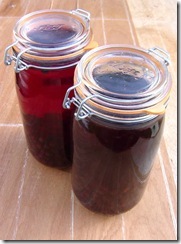 a bit of a waste, since you won't really taste the designer flavours. You could use vodka if you want a cleaner taste, but personally I think the combination of the juniper in gin and sloes is a good one. Seal the jar and give it a thorough shake to dissolve the sugar. Put the jar away somewhere out of direct sunlight but not too cold and try to remember to give the jar a shake every day for the next two weeks. By this time the gin should have started to take on the characteristic colour.

Leave the gin in the jar until Christmas, shaking it occasionally when you remember. If you have the patience, it will be even better if you leave it until the following Christmas.

When you can stand it no more and just have to taste the gin, then simply filter it through muslin into clean bottles. Some people use the gin-soaked sloes in crumbles or chutneys while other people in the West Country add the sloes to still cider for a few days to produce an odd-tasting drink to keep the cold out. Actually, I'm not convinced by either approach and put the old sloes in the bin.

Purists drink it neat, the stylish drink it in cocktails and trashier people like me tend to add some tonic and plenty of ice. 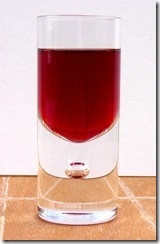 P.S. You can use the same process with damsons if you come across those in the hedgerows, although perversely I think damsons work best in vodka for some reason.
Drinks Sloes