November 10, 2011
We were  meandering along the beautiful coast of the Cotentin peninsula in Normandy last month in search of Port Racine, the smallest and just possibly the most charming port in France.  Port Racine, we discovered, is very close to the village of Omonville-La-Petite, the home and last resting place of Jacques Prévert. Since I love his poetry (even if I struggle with French), I felt it was only right that I go and pay my respects. 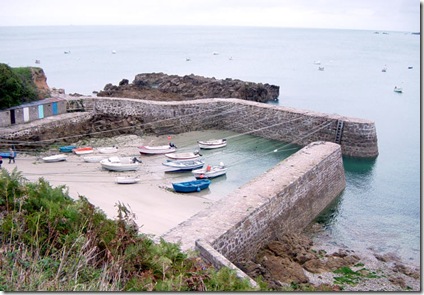 Visiting any last resting place is obviously something of a solemn occasion, but, possibly because it was near to lunchtime, I couldn’t shake off a vague memory of the following line from the poem ‘Lanterne Magique de Picasso’ (from the book ‘Paroles’):

‘The dazzling appearance of a Malaga grape on a rice pudding’
A gâteau de riz isn’t exactly a rice pudding in the British sense – it’s more solid and usually has a layer of caramel around it. (In the Cotentin you’ll often come across a rice dish called teurgoule, which is much closer to the British style of pudding but is usually flavoured with cinnamon. Sorry, I’m digressing.)

A while later I was thinking about that line of poetry and about the British habit of adding jam to a rice pudding and the two ideas merged slightly oddly into this dish. The topping follows the same process as making a grape jelly (a very pleasing thing in itself) but stops short of allowing the jelly to set. Keeping a thick, but runny consistency should allow the grape syrup to mix nicely with the rice as you eat it. The gâteau de riz layer is perhaps a little less firm than many French versions and is flavoured with lemon rather than vanilla.

I served the dish in a glass in homage to the French love of ‘verrines’ – or, to put it another way, their love of putting a wide range of food into glasses. This should serve 4 but if you have any grape syrup left over then it’s excellent with ice cream or added to savoury dishes in place of redcurrant jelly. 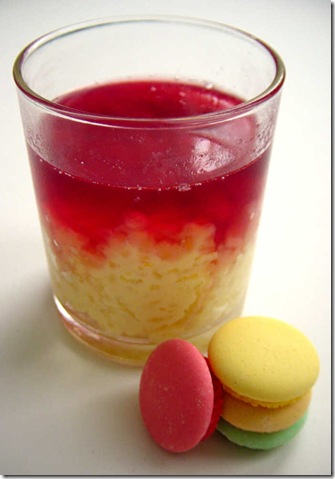 Start making the grape syrup the day before. Wash the grapes and add to a non-reactive saucepan with a splash of water. Place on a low heat. Cover and cook gently until the grapes break down completely and release their juice. This will usually take between 10 and 20 minutes. Unless the skins are very thin, the grapes are likely to need a little persuasion with a fork during the cooking or they may remain stubbornly whole.

Place the contents of the pan in a jelly bag (or a double layer of muslin) and allow the juices to drip into a bowl overnight. As usual with jellies or jams, don’t try to speed the process up by forcing the grapes through or you’ll get a cloudy result.

The next day, measure the amount of juice obtained. It won’t seem very much, but I promise the taste will be intense. I had 200 ml of liquid and added 140 g of sugar, but you may find that you have a little more or less liquid and will need to adjust the amount of sugar to compensate. Put the sugar and the liquid into a pan with the lemon juice and heat gently with a lot of stirring until the sugar has dissolved. Bring the mixture to boiling point and boil for 5 minutes. It should have thickened considerably after this time, but won’t have reached the setting point of a jelly. Set aside to cool and store in the fridge until needed.

Now for the gâteau de riz bit. Add the rice, lemon zest and milk to a saucepan and bring to simmering point with plenty of stirring. Continue simmering for 30 minutes, stirring regularly, until the rice is fully cooked. Preheat the oven to 150°C. Whisk the egg, caster sugar and crème fraîche together and stir into the rice together with the lemon extract. Put the whole lot into an ovenproof dish and place in a bain marie – well okay, place the ovenproof dish in a roasting tin containing hot water. Put in the oven for 30 minutes until the rice is set, but still creamy. Allow to cool.

Spoon a portion of rice into each glass and chill. Pour over a layer of grape syrup just before serving. A few biscuits would be nice alongside the dish.  (I used some colourful biscuits from Saint-Vaast-la-Hougue in the Cotentin just to keep the theme going). I’m entering this in the Novel Food challenge hosted by Simona of the blog Briciole, although I admit I may be stretching a point. I think it’s fair to say that this is a long way from what M Prévert had in mind when he picked up his pen.
Dessert France Grapes Novel Food Rice
Location: 50440 Omonville-la-Petite, France