November 04, 2011
This is a simple and traditional recipe that I hadn’t made or even thought about for many years until the other day when I saw it mentioned in a restaurant menu dating from the early eighties. I think Lamb Shrewsbury is most often found as a sauce accompanying roast lamb and that’s probably the most authentic version. The recipe here, though, is for pieces of lamb cooked in the sauce and is a recreation of the way I first came across the dish sometime in the early or mid seventies. It’s a little retro but then so am I, probably.

I seem to remember that this dish was often served with buttery mashed potato to soak up the sauce, but for this remake I served it with some roasted new potatoes and steamed green beans. This will feed 2 but probably with some sauce left over. You might need to play a seventies album while eating in order to get the full impact – maybe ‘Fleetwood Mac’ or ‘The Year Of The Cat’. 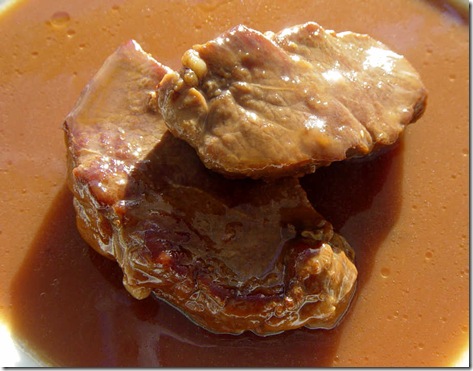 Add the redcurrant jelly and Worcestershire sauce to a small saucepan, place on a low heat and stir until the jelly has melted. Add the lemon and orange juice and the lemon zest. Take off the heat, but keep warm.

Heat the oil and butter in a frying pan and brown the lamb lightly. Place the lamb in a casserole dish, leaving the fat behind in the frying pan. With the frying pan still on the heat, add the flour and stir around for a few minutes. Pour in the redcurrant jelly mixture and the stock. Stir well, season with a little pepper (it’s unlikely to need any extra salt) and pour over the lamb in the casserole dish.

Cover the dish and put in the preheated oven for 60 – 75 minutes. The lamb should be very tender and the sauce intensely flavoured in a seventies sort of way.
Historic Recipe Lamb