January 23, 2012
I’ve made a few versions of this dish in the past but I can’t remember where I first came across the recipe. Until recently I’ve used a more complicated set of spices and only dried chillies. Back in 2010, though, a local restaurant 'Massala' (now sadly defunct) sent out a newsletter containing a recipe for laal maans that used fresh chillies and black and green cardamom. I've not used the 'Massala' recipe here but I’ve taken those two ideas and shoehorned them into the recipe I’d already scribbled down from somewhere else.

Anyway, this is my version of laal maans and I like it even though it’s almost certainly a very long way from an authentic Rajasthan dish now that I've finished messing about with it. This should serve 2. 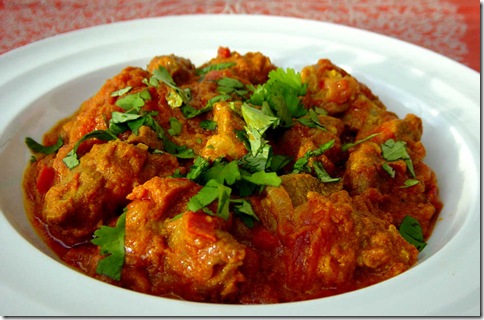 Stir the chopped chillies, the chilli powder, turmeric and a generous seasoning of salt and pepper into the yoghurt. Gently fry the onions in a little oil until they’re very soft and starting to colour (take plenty of time over this).

Split all of the cardamom pods and lightly crush the seeds. Add the garlic and the cardamom seeds to the onions and fry gently for another 2 or 3 minutes. Turn the heat up and add the lamb. Fry the lamb for another 3 or 4 minutes until it’s evenly coloured. Add the yoghurt mixture to the pan, turn the heat down and simmer gently, stirring every now and then, until the most of the moisture in the pan has evaporated and the yoghurt mixture is coating the lamb.

Preheat the oven to 150°C. Sprinkle over the ground coriander and add the tomatoes to the pan. Break up the tomatoes a little and add around 100 ml of water, or just enough to cover the meat. Bring the pan to the boil, cover and transfer to the oven.

Cook in the oven for around an hour until the meat is very tender. Serve sprinkled with plenty of fresh coriander.
Chillies Lamb