December 15, 2013
This month Dom of Belleau Kitchen has dared us to reveal the contents of our larders or ingredients cupboards for his Random Recipe challenge.  I'd like to say that I have all my ingredients carefully and neatly stored in one location but actually they're scattered all over the place. I decided that the cupboard with the bottles and jars (and a few other things) was a decent candidate for a quick snap. 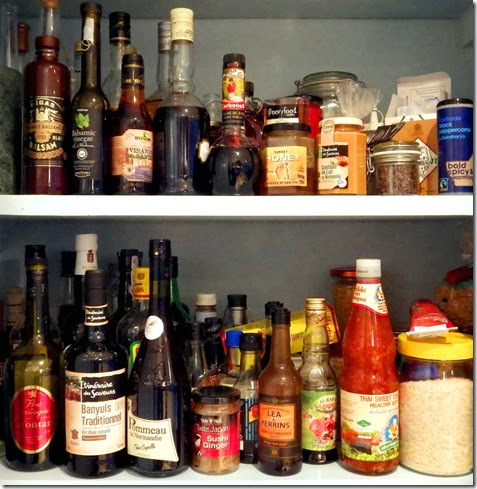 This challenge has forced me to look carefully at the contents (not something I do too often) and I'm surprised by how much the ingredients have changed from, say, twenty years ago. For instance, I seem to have developed a bit of a vinegar obsession. Twenty years ago, I might have had 3 or 4 different vinegars. It might not be obvious from the picture, but there are 14 different vinegars in that cupboard.

Then there are other things that I didn't use at all twenty years ago that have become essential cupboard ingredients. Top of that list is pomegranate molasses. I first bought a bottle in a Lebanese grocery shop in London in the 1990s and I had no idea what I was going to do with it. These days I get agitated if I don’t have at least one spare bottle in the cupboard. When anyone extols the virtues to me of living deep in the countryside, I can’t help thinking, “The peace and quiet and beautiful surroundings are all very well, but how far do you have to go to buy pomegranate molasses?”

The other thing that really struck me was how many bottles of booze have made their way into the kitchen from the official booze cabinet. This is partly because I've used them in cooking and can't be bothered to put them back and partly because of a bit of a weakness for the kitchen aperitif. Nothing gives me a more relaxed and happy feeling than a little apero as I look forward to a satisfying meal. A kir, a small glass of Banyuls, pommeau or pineau will usually make my day. (I'm not absolutely sure why or how there’s a bottle of Latvian Black Balsam in the cupboard but I’ll get around to using it sooner or later.)

I need a bracing aperitif after all that cupboard rumination and I've randomly (more or less) chosen a glass of floc de Gascogne. Floc is a combination of armagnac and grape juice from the south west of France and can be either rosé (actually quite a red shade of rosé at times) or white. It should be served chilled (though not too chilled), and will go down very well in an English kitchen on a winter's evening. It's probably even better sipped as the summer sun goes down on the Gers countryside, the distant Pyrénées fade into the darkening sky and the farmer wends his weary way home from his fields of maize, no doubt wondering just how far he’ll have to go to get his hands on a decent bottle of pomegranate molasses.