July 04, 2011
In my random and seemingly unending tour de French cakes and biscuits we find ourselves this week wandering the mountains of the Savoie in search of this wonderfully light sponge. There are many versions of this ancient recipe, which is said to date back as far as the 14th century. Some recipes add less lemon, some add more and some versions are  flavoured with orange or lime. (I have to admit that vanilla isn't really traditional, but I add a little anyway). 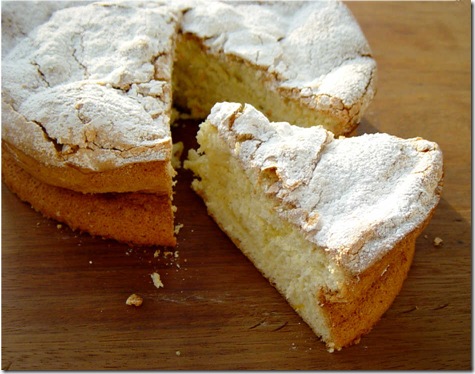 The big difference between versions of this cake is in the flour. Add more flour and the cake will be  more stable and less prone to collapse but will also be less light. You can also choose to use only plain flour, a mix of plain flour and cornflour or a mix of plain and potato flour as here. Anyway, this is the version I’ve evolved which is less stable but lighter.

You could eat a small piece with a cup of tea though some prefer it with a glass of champagne. I've also seen people split and fill it with cream or jam like a Victoria sponge. Personally, though, I think it’s best served as a dessert with fresh fruit or fruit compote and crème anglaise.

Butter a 22cm cake tin. This needs to be fairly deep since the cake rises alarmingly during baking. Preheat the oven to 170°C.

Beat the egg yolks together with 100 g of the caster sugar until they’re very pale. Briefly beat in the lemon zest and vanilla paste.

Beat the egg whites to the soft peak stage, then gradually beat in the remaining 100 g of caster sugar until the mixture forms stiff peaks and starts to look glossy.

Fold the egg whites into the egg yolk mixture. Sieve the two flours together and fold them in as well. Don’t overdo the folding or you’ll lose some of the lightness.

Pour the mixture into the prepared tin (ideally it should only be about half full) and lightly level the top. Sprinkle over the 2 teaspoons of icing sugar.

Place in the oven and bake for around 30 minutes. (A skewer or knife point should come out clean when it’s done). Take the cake out of the tin while it’s still warm and cool fully on a rack. The cake will sink back while cooling – don't worry about this, it's normal. Decorate the top with a little more icing sugar. 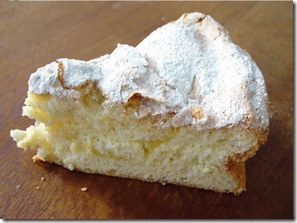