July 11, 2011
I intended these two little sweet treats to be served with coffee at the end of a meal but they could actually be used as a dessert in themselves – a sort of small café gourmand.(In case you haven’t come across it, the café gourmand consists of a few mini desserts served alongside a cup of coffee – it literally means a greedy coffee.) 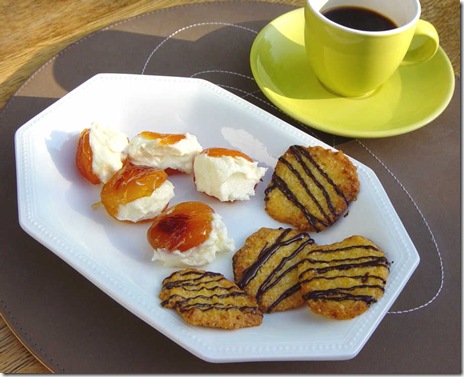 Since I used it for last months Random Recipe challenge I've become slightly obsessed with the Constance Spry Cookery book which was published back in the 1950s. One of the biscuit recipes in this venerable tome is for Orangines, which are made with candied orange peel. I've adapted this to dried apricots and to the food processor which makes the recipe a lot easier to make by removing all that 1950s-style chopping.

The biscuits manage to be chewy and crispy at the same time and, as well as being good for nibbling with coffee or tea, they would work well alongside creamy desserts or ice cream. Although I've decorated them with chocolate here, they're pretty good without it too.

This amount should make between 50 and 60 small biscuits.

Preheat the oven to 160°C. Line a couple of oven trays with non-stick baking parchment or silicone sheets.

Put the almonds and dried apricots into the food processor and whiz them until very finely chopped. Add all the other ingredients except the milk and chocolate and whiz briefly until the mixture forms into a dough. If the mixture seems reluctant to come together then add the milk one teaspoon at a time and whiz briefly.

Place half-teaspoonfuls of the mixture onto the prepared oven trays and flatten and shape the dough into rounds with a slightly wet fork. (They're best if they're pretty thin, but personally I'm not too fussy about them being perfectly round.)

Bake in the oven for 9 –12 minutes – the biscuits should be browned around the edges but not too dark. Leave the biscuits to cool on the trays for a few minutes before removing and allowing to cool completely on a wire rack. 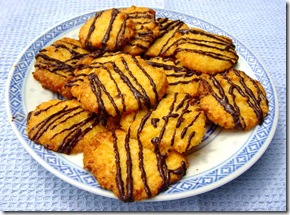 This is an adaptation of a Turkish sweet recipe from one of the books by the excellent Claudia Roden. The original certainly doesn't contain chocolate and uses a thick cream filling but I decided to try using a yogurt base instead. My wife has been making labneh recently by straining low-fat Greek yogurt overnight and we decided to try this in sweet dishes as well as savoury. Happily it worked really well with the apricots and it has a lot less fat than mascarpone or cream.

Soak the dried apricots in water for at least 4 hours – do this even if the packet or the apricot seller tells you that they don’t need soaking. Add the sugar, water and lemon to a saucepan and bring to the boil while stirring. Drain the apricots, add them to the syrup and continue simmering for around 20 minutes until the apricots are very tender (but not falling apart) and the syrup has reduced enough to coat the apricots. Let them cool down. 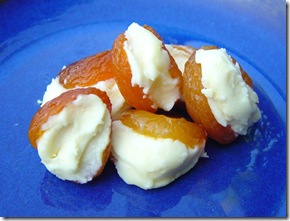 Serve as many filled apricots with as many apricotines as the mood takes you along with a strong coffee – or just don't bother with the coffee.
Apricots Chocolate Dessert