July 30, 2011
I promise that this post will be about food very shortly, but first I need to make my brief annual cricketing digression. So here goes - I met W.G. Grace at a bus stop in the early 1970s. (In case you’re unaware of the Great Man, W.G. Grace was the finest cricketer that ever lived – he certainly seemed to think so.)

looked a lot like him. It would have been the cricket season at the time because I’m sure it was summer. In fact nobody really bothered with winter back then – it just didn't seem necessary.

We got talking. I probably said something witty like “Do you know that you look like W.G. Grace?” In return, he told me two things about food that I’ve sort of remembered ever since (I told you I’d get to the food bit eventually). First, he told me that there was a fish that nobody wanted to eat and so it cost next to nothing but was really tasty. One of these days it was going to be popular and expensive. I’d never heard of it – it was called monkfish.

The second thing he told me was how he made carrot cake. I should have paid more attention or written the recipe down but I wasn’t into food as much back then. (I’m not entirely sure what I was into, but it probably had long guitar solos).

The other day I was watching a field full of cricketers running to get out of the rain when I suddenly remembered this encounter and decided to try to recreate that cake. I’m sure it wasn't an American style cake with cream cheese topping but I think he said he put icing on it. I also remember him saying that he used orange and lemon. That does sound most like a Swiss-style carrot cake and so here is my attempt to capture the spirit of that cake even though it’s nearly forty years late. I don’t know if it’s close to the original but it tastes very good and I greatly enjoyed a slice or two as the rain dripped gently off the pavilion roof onto a copy of Mr R. “Richie” Benaud’s autobiography. 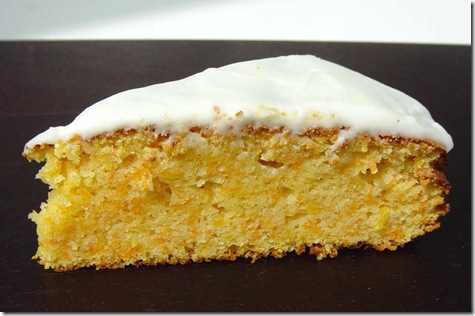 Butter a 22cm cake tin (springform, preferably). Preheat the oven to 180°C. If you use a processor to grate the carrots, then they may be a little liquid. If so, wrap them up in a clean tea towel and squeeze out some of the excess juice before weighing them.

Whisk the egg yolks and sugar together thoroughly until they look very pale. Beat in the flour and baking powder. Stir in the grated carrot (the mixture will be quite stiff at first, but keep at it), followed by the ground almonds and finally the lemon juice and zest and the orange extract. Make sure that all the ingredients are evenly mixed in.

Whisk the egg whites to the stiff peak stage and fold them carefully but thoroughly into the mixture. (This will be easier if you do the usual trick of stirring in a large spoonful of the egg white before starting to fold in the rest).

Pour the mixture into the tin, even it out and bake for 35 to 50 minutes. The cooking time is likely to vary a fair bit depending on the juiciness of your carrots. Test in the usual way by inserting the point of a knife into the cake – it should come out clean. Allow the cake to cool a little in the tin before removing it and leaving it to cool completely on a rack.

For the icing, simply mix the icing sugar with the Cointreau and orange extract, then add as much lemon juice as needed to make a pliable, smooth icing (you may need a little more than 1 tablespoon of lemon juice). Spread evenly over the cold cake.