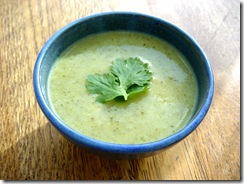 I'm willing to admit that this soup comes as an attempt to use at least some of the bumper crop of courgettes and herbs from the garden, but I think it tastes pretty good too.  Courgettes are good with other herbs like basil too if that's what you have to hand and if you don't have sorrel, then add a little more lemon juice instead.

This soup will work either hot or chilled, but if you're serving it chilled then you may want to increase the amount of lemon or sorrel for

that refreshing sharpness on a warm day.

Instead of reaching for the olive oil as I usually would, I used a little extra virgin rapeseed oil. These oils have a very pleasing nutty and slightly grassy flavour which works really well with courgettes. The one I used was Hillfarm extra virgin cold pressed rapeseed oil  but I've also been using Farrington's Mellow Yellow cold pressed rapeseed oil and that's an excellent product as well. Both these oils work very well in courgette cake too (told you that I had a lot of courgettes).

I was intending to make enough soup for 4 but actually ended up with around 5 servings but I don't think you need to be too precise about exact weights and amounts in this soup.

Start to soften the onion in a little of the rapeseed oil. After 5 minutes or so add the potato, stir it around and keep frying gently for a couple of minutes. Add the coriander stalks and pour over enough of the stock to just cover the potatoes. Cover the pan and simmer gently for 12 -15 minutes until the potatoes start to soften.

Slice courgettes into rounds – the thickness isn't really critical, but not too thin. Add the courgettes and the rest of the stock to the pan and simmer for another 10 minutes or until the courgettes have softened but not fallen apart. Add the coconut milk and all the herbs, give the pan a thorough stir and take it off the heat.

Leave the pan to one side to cool and infuse for at least 20 minutes before liquidising. Add salt and pepper after liquidising (it probably won't need a lot) together with a squeeze or two of lemon juice. 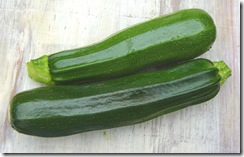