Showing posts from October, 2013
Show All

The Duck Legs of Normandy 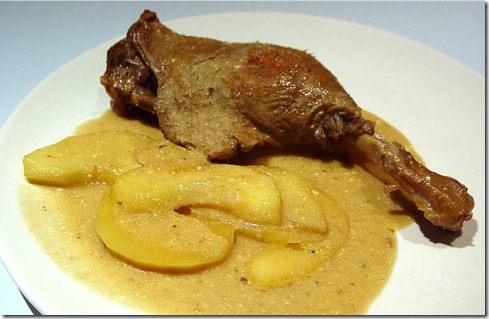 Duck is one of my favourite meats, but it does tend to be a bit expensive. Duck legs, though, are the cheaper option in most supermarkets. A while ago I got into a discussion with someone who was looking for new and interesting ways to cook duck legs. I can’t quite remember what conclusions we came to but afterwards I started wondering what was wrong with the traditional methods. To my shame, I hadn't made this sort of dish for years and I needed reminding just how good it can be. There’s nothing new or revolutionary about this recipe. It’s the method of Normandy cooking that I first picked up years ago, although there’s no guarantee that it would be considered truly authentic in the Vallée d'Auge.  Very much the same method of cooking is often used in Normandy for chicken or guinea fowl, although they will usually require less time to cook. I did use a genuine Normandy cider for this dish but it’s not the only place in the world that makes excellent cider. Most decent dry
7 comments
Read more 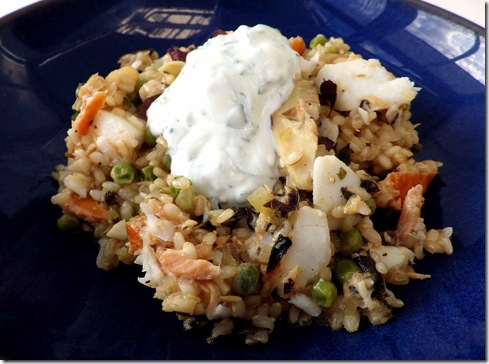 Once upon a time, when I was still young and foolish, a lady friend offered to cook me dinner. She made a classic kedgeree and very nice it was too. The second thing she cooked for me was also kedgeree. So was the third and the fourth. It turned out that kedgeree was the only dish she could cook. After a while,  she went off with an annoyingly handsome bloke from Sweden who played electric violin. Another friend of mine offered to cheer me up by making me dinner. She made me kedgeree.  It hasn't put me off, though; I still love this British classic. Although, after all these years and several shedloads of kedgeree, I do tend to throw in a few variations now and then. This version has so many variations that I don’t think it’s quite kedgeree any more. One major variation is that I use short grain brown rice, which adds nuttiness and extra texture to the dish.  (This type of rice isn't common in supermarkets but you can find it in health food shops.) Rather than smoked haddock
18 comments
Read more
More posts