Way back when I started this blog it was difficult to find recipes in English for many of the cakes and breads that I'd enjoyed in France. So, over the years, I added quite a few French baking recipes to this blog which seem to be my most popular recipes and I thought this index might be useful. For the most part, these aren't the sort of thing you'd find in a fancy French patisserie. They're home baking - often the sort of cake described as a ‘gateau de voyage’ or examples of the ‘cuisine de grand-mère'.  Admittedly, I often fail to stick to the classic ingredients and methods, so I make no claims about authenticity.

The division into cake, biscuit, dessert etc here is a bit artificial - there are many cakes that I'd serve as a dessert and there are some biscuits that could really be described as cakes and maybe vice versa.
Cakes
Canelés are the famous Bordeaux speciality that I try to make as simple as possible, partly because people often try to make them as complicated as possible. There are two versions on the blog.
Canelés
Chocolate Canelés
Financiers are traditionally made with egg whites and almonds but there are two less classic variations here.
Pistachio Lemon and Rapeseed Oil Financiers
Pamplemousse Financiers
Gâteau Ardéchois
A cake made with unsweetened chestnut purée that may not be entirely authentic but I think is faithful to the spirit of the Ardèche.
Gâteau au Chocolat de Nancy
A flourless chocolate cake from Nancy.
Gâteau Creusois (sort of)
A version of a cake with a disputed history that's made with ground hazelnuts.
Gâteau de Savoie
A very light and very old style of cake from the mountains. Great with fresh fruit and custard.
Gâteau Lorrain
A cake made with egg whites. It has a classic simplicity but I've no idea about its provenance.
Gateau Nantais (or Somewhere Near It)
A version of the ancient, iced cake from Nantes
Grapefruit Yogurt Cake
A grapefruit variation on a very straightforward cake that's a bit of a homemade classic in France.
Hazelnut and White Chocolate Friands
A bit of a cheat because this claims to be a friand but was, strictly speaking, based on a French financier. What's the difference between a friand and a financier? Answer: not a lot other than the shape maybe.
Lemon Madeleines
A not terribly authentic variation on madeleines to be eaten while watching cricket.
Navette Albigeoise
A cake to serve with coffee or dessert wine.
Navettes
A version of the Marseille cake or biscuit that has proved to be a bit of an acquired taste for some.
Nonnettes are small cakes with a lot in common with pain d’épices but have a soft interior flavoured with jam, marmalade or curd. I love them so much I've posted three versions.
Nonnettes for Early Summer - with gooseberry jam
Lemon And Cardamom Nonnettes - with lemon curd
Nonnettes with White Chocolate Chips - with marmalade
Pain de Gênes
An inauthentic but very simple version of this almond cake, which is named after Genoa but was invented in France.
Pain d’épices is often described as a French gingerbread and if you combine softer British gingerbread with a honey cake, then that's not far off. There are two versions on the blog.
Pain d’Épices
Pain d'Épices Revisited
Palets de Dames
A little treat from the north that's somewhere between a cake and a biscuit.
Passoã Babas
A very easy riff on the classic baba using Passoã and baking powder.
Pithiviers Fondant
A meltingly soft almond cake with an apparently long history.
Quatre Quarts
A classic, simple cake that's very like a pound cake and can be  found pretty much everywhere in France.
Reine de Saba
A version of a classic chocolate cake.
Sweet Wine and Olive Oil Cake
A cake from the Languedoc that I usually serve as a dessert.
Tourte or Pastis or Croustade of The Pyrenees
A Madeira style cake with multiple names from the southern mountains.
Visitandines
A very old recipe (apparently) for little cakes that are similar to financiers. Originally made by nuns in  Annecy.
Walnut Cake or Gâteau aux Noix
A simple cake from Sarlat in the Dordogne made with ground walnuts. 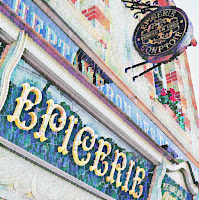 Breads
Breadmaker Lemon and Almond Brioche
A simple almond,lemon and vanilla brioche using the bread machine
Fallue
A brioche from Normandy often served with teurgoule (a rice pudding).
Galette De Savennières (sort of)
A lighter style brioche from the Loire valley (sort of) adapted to benefit from the help of the breadmaker.
Gâteau Battu
A version of the great but shamefully underrated enriched bread from the Somme area.
Taloa with Duck Legs and Plums
Taloa is a simple Basque flatbread made with cornmeal.
Wheat Beer Walnut and Fig Breadmaker Loaf
A simplified version of a Northern French bread. 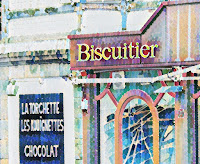 Biscuits (for want of a better word)
Bigoudens
Brittany is famous for its butter biscuits but this one is less well known.
Croquants de Corde
A simple, delicious and ancient biscuit from Cordes-sur-Ciel in the Tarn region. Recently this biscuit has turned up selling at a premium price in a British supermarket.
Langues de Chat
The classic dessert or teatime biscuit paired with a strawberry and white chocolate ice in this particular recipe.
Macarons - These are not the modern, highly-coloured and refined meringue delicacy, but attempts to recreate the more ancient and rustic almond biscuits that turn up in different forms around France.
Macarons d'Amiens - an ancient recipe from the city of Amiens on the Somme river
Véritables Macarons de Somewhere or Other - a macaron recipe that combines many regional variations
Parmesan Sablé
Not strictly a traditional French biscuit but it has the right feel about it and it did become quite common in French restaurants a while back. It's also the first recipe that I published in this blog and still one of my favourites.
Patiences Fraxinoises
A light, little treat from Provence.
Rousquilles
An iced biscuit from Collioure on the Mediterranean coast. Ideally eaten while staring at the sea.
Speculoos – The Domesticated And Eggless Version
Certainly not exclusively French but a biscuit that is treated with real reverence in some parts of northern France. This is an attempt to recreate an unusual and, allegedly, traditional version.

Desserts
Far aux Pruneaux
A dessert in the clafoutis style that was born Brittany.
Flognarde
Another dessert in the clafoutis style using apples, this time from the Limousin region.
Fromage Frais Gâteau
A  modern, health-conscious version of a more traditional French flan.
Gâteau aux Noisettes
A celebration of hazelnuts owing a huge debt to the great Pierre Koffmann (I am not worthy).
Gâteau Breton with Dates and Chocolate
A classic Gâteau Breton with a couple of eccentric additions
Millas Charentais (Almost)
A fairly loose interpretation of the traditional flan-style dessert from the Charente made with maize flour.
Mini Lemon Babas
Based on the French classic but with a distinct Italian accent.
Pear Clafouti
A simple classic via Robert Carrier
Tarte Au Sucre
A Northern French version - a sort of sweet brioche tart.
White Chocolate and Honey Coulant with Macadamias and Pistachios
A modern French phenomenon based, in this case, on a recipe from Vichy.

Savoury Bits
Socca
Lovely snack food made with gram or chickpea flour.
Tarte au Maroilles – The Lazy Person’s Guide
A dough-based tart from the north made with the local, very powerful cheese.