May 10, 2015
Several years ago I was called on to make some cakes as part of a birthday celebration. That's normally pretty straightforward but at the time I was down in the south-west of France, in the Gers, and I wasn't quite sure what the local French people would make of British cakes. After all, the mayor had been invited and you certainly don't want to upset him. We decided that small chestnut cakes covered in icing would be a bit different and a good alternative to some of the other delights on offer. They turned out OK but I did notice that some of the French guests seemed to look at them a little oddly. Maybe I'd overlooked the French tradition of chestnut cakes and gone a little bit too far from the norm. After that experience I started looking for a more traditional form of chestnut cake and since they've got an awful lot of chestnuts in the Ardèche, that seemed like a pretty good place to start.

To be honest, I'm not absolutely sure how close this cake might be to a genuine gâteau from the Ardèche. I can't remember exactly where I found the original recipe but I think it was from a chestnut purée company – probably off the back of a can. I've played around with the recipe so it's definitely no longer truly authentic. The result is moist and not overly sweet and I think it's particularly good as a dessert cake. The extra bits of  good news are that it's a really easy cake to put together and that there's not a lot of fat in chestnuts. Don't expect a crumbly, sponge-like texture, though.

Chestnut purée is available in different forms. The type I've used here is unsweetened and not flavoured. This type is fairly widely available in the UK but there are other purées which are sweetened and sometimes flavoured with vanilla. If you're using sweetened purée then lower the amount of caster sugar in the recipe by at least 25 g and if it's already flavoured you may not need the vanilla paste. The purée I've used is thicker than some of the French products and I've adapted the recipe to suit. If the purée you use is a little runny, then you may find the baking times increased. Finally, I've added a little Frangelico liqueur to the cake because I love the flavour but it’s certainly not traditional. You might well find that French bakers would add some rum, though.

I've been working on a new version of the original, small chestnut cakes as well but I'll tell you about that sometime in the future. 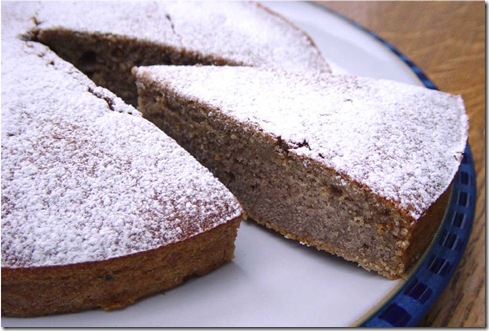 Whisk the eggs with both types of sugar until the mixture is light in colour. Beat in the flour and baking powder.

Add the vanilla paste, Frangelico, chestnut purée and butter and beat these in until the mixture is thoroughly combined and smooth.

Place the mixture in the prepared tin, smooth the top and bake for around 35  - 40 minutes or until a knife point comes out clean. Allow to cool in the tin for at least ten minutes before turning out. Serve sprinkled with a little icing sugar and hope that the mayor approves.
Cake Chestnuts Dessert France