December 06, 2010
I remember with something close to horror eating strange puddings made with ground rice as a kid. But in my defence I should point out that cooking as we know it today hadn't been invented then and food was mostly hit with sticks until it gave up. There are ground rice puddings from many parts of the world flavoured with a vast range of lovely things such as rosewater, orange flower water or cardamom as well as good old vanilla, so I thought I should try making some myself. It turns out that everyone else was right and they're very comforting. This pudding will be even more silky and luxurious if you add some cream, of course, but I'm trying to be a little healthy. 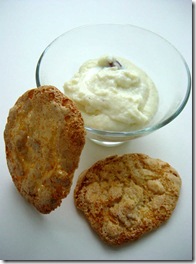 The croquants are the traditional biscuit from the beautiful town of Cordes-sur-Ciel in the Tarn. The recipe dates back to the 17th century so I've tried 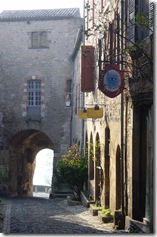 to restrain myself from mucking about with it too much. La Fête du Croquant is held in Cordes-sur-Ciel every June, which sounds like an excellent opportunity to eat too many biscuits. (For some reason we never seem to want to have a Festival of the Digestive or the Rich Tea  in the UK.) The croquants aren't usually served with English rice pudding, of course, but I don't have any decent Gaillac wine to hand.

The quantities here should give you 2 generous portions of rice pudding (or maybe 4 refined portions) and around 16 croquants, but that will depend on how big you want to make them. The croquants will keep well in an airtight tin.

Soak the raisins in the limoncello for at least ½ hour before you start.

Mix the rice with around 100 ml of the milk and add this mixture to the rest of the milk in a saucepan. Bring to the boil with a lot of stirring. Once it reaches boiling point, simmer gently for around 7 minutes making sure that you continue to stir frequently. By this time the mixture should have thickened a fair bit, without becoming solid.

Stir in the sugar, lemon extract and the raisins with any remaining limoncello. Keep cooking gently (and stirring) for 2 -3 minutes. Spoon into serving dishes and chill until needed.

Preheat the oven to 190°C. Mix the flour and sugar together. Mix in the egg whites – the best way is to just work these in with your fingers. (This is pleasingly messy). Once this mixture has come together add the almonds and work these in as well.

Line a couple of flat oven trays with either silicone sheets or non-stick baking parchment. Plop something like tablespoonfuls of the mixture onto the baking trays. You don't need to flatten the piles of mixture, but make sure you leave a fair amount of room between them since they will spread out as they cook. Bake for 12 – 16 minutes or until the tops are light brown – be careful that they don't get too dark.

Remove from the oven but don't try to remove them from the trays until they're cold or nearly cold – they will stick to pretty much everything while they're hot. 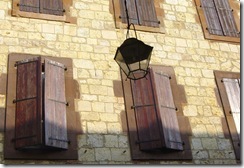