June 02, 2011
I really enjoy classic rum babas but, on the other hand, it can be a bit daunting to be faced with a large cake soaked in a powerful rum syrup. So these mini babas are my suggestion for an alternative.

I used a  small French cannelé mould for these babas, which has the advantage not only of looking interesting but also having a dimple in the base of each cake which is just perfect for filling with the syrup. I bought my small, silicone cannelé mould very cheaply in Auchan (the French supermarket chain) but it’s perfectly possible to use small cake or dariole moulds instead. I’d recommend using silicone moulds if possible – it can be tricky removing little, warm babas from anything else. (Just as an aside, I have used the cannelé mould for its designated purpose and, if you’ve not sampled them,  I can highly recommend trying homemade canelés de Bordeaux - a bit scary to make but absolutely wonderful to eat. Maybe I'll get up the courage to blog about them one day.) 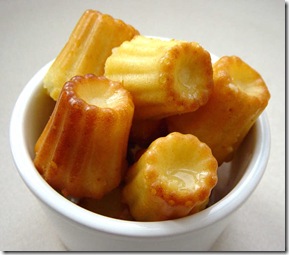 This amount should make at least 20 small babas.

Whisk the egg yolks with the caster sugar until very light in colour. Briefly beat in the melted butter, milk, yeast and lemon zest. Turn the speed to low on the mixer and add the flour gradually until it’s thoroughly mixed in. Beat the egg whites to the stiff peak stage. Stir a spoonful of the egg whites into the yolk and flour mix to loosen it and then carefully fold in the rest.

Spoon or pipe the mix into the moulds (if you’re using really small moulds, then piping can be easier) - the moulds should be about ¾ full.

Bake at 160°C. How long they take will depend on the size of the moulds – in the small cannelé moulds they take around 15 minutes but this could be 20 minutes or longer in larger cake moulds. They should be starting to lightly brown -  but don’t overdo it.

While the babas are baking, make the syrup. Dissolve the sugar in the water over a low heat with lots of stirring, then bring to the boil and boil for 2 minutes or so. Add the limoncello and lemon juice and continue boiling for another 4 or 5 minutes. Turn the heat to low and keep the syrup warm.

Take the babas out of their moulds while they’re still warm, if possible. (If you’ve used cannelé moulds then cut off any stray bits from the tops of the babas so that they stand upside down neatly). Place the babas in a bowl and pour over half the syrup. Let them stand for a while and soak up the syrup as they cool – don’t put the syrup back on the heat. Once most of the syrup has been absorbed, pour over all, or as much as you fancy, of the rest of the syrup.

Allow the syrup to soak in for at least a couple of hours before serving, spooning it over the babas every so often if you remember.

Personally I prefer to serve these with thick Greek yoghurt but cream or crème fraîche is probably more traditional. Some fresh berries wouldn’t go amiss either. The babas should keep in their syrup for a day or two in the fridge, but I think it’s unlikely that I’ll ever find out for sure because they’re just too easy to eat. 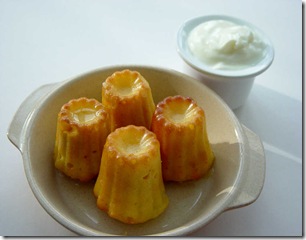