This Is Not A Gâteau Creusois

February 23, 2013
Today we make another stop on my annoyingly long tour de cakes de France and find ourselves in the Creuse. The Creuse is a lovely region, although the last time I was there it was around this time of the year and it was really cold. Anyway, it’s there that you’re likely to find examples of a gâteau called ‘Le Creusois’ on sale.

It’s also possible that you’ll find several similar cakes under slightly different names in French supermarkets, as well as a number of versions of gâteau Creusois recipes which people will tell you are the real, authentic recipe that their grand-mère made. They may well be authentic and ancient recipes – I have nothing but the greatest respect for grand-mères – but the particular cake sold as ‘Le Creusois’ was actually born shortly after the Beatles gave their last performance on the Apple roof in 1969. It appears that the gâteau was inspired by a 15th century parchment found in a monastery around that time, although the actual recipe itself is a closely guarded secret.

I have no wish to upset the pâtissiers or any of the other residents of the Creuse with my efforts so let me make it absolutely clear that this is not a Gâteau Creusois, it just happens to be rather like one. Let’s think of it instead as my tribute to that fine region and as a delicious hazelnut cake. 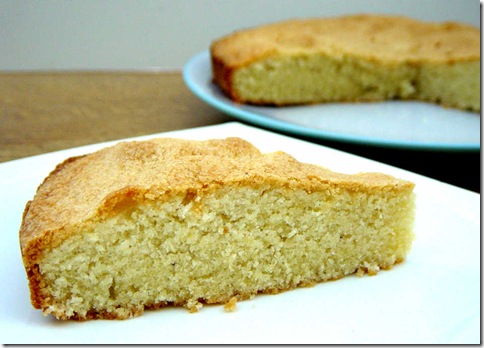 In the Creuse the gâteau (whatever it’s called) is most often eaten cold as a dessert with crème anglaise or crème fraîche and it’s truly delicious that way. On the other hand, if you want to break with tradition, try making a syrup of equal parts water and sugar, boiled together for a minute or two. Take the syrup off the heat and add a very generous glug of Frangelico liqueur. Once cool, make a few small holes in the top of the cake with a knifepoint and soak it with the syrup. That's what I did and it made the cake sink a little in the middle (a bit like the Creuse) but, in my opinion, it makes an even nicer dessert.

Grease and line a 23 cm cake tin – a springform tin is probably best, if you have one. (You could use a smaller tin if you want a thicker, more British-looking cake, but I think the thinner gâteau is nicer as a dessert). Preheat the oven to 160°C.

Mix together the sugar, flour and hazelnuts. Thoroughly beat in the softened butter followed by the whole egg.

Whisk the 2 egg whites to the firm peak stage and stir about a third of them into the mixture to loosen it. Gently, but thoroughly, fold in the remaining egg white. Put into the prepared cake tin and level the top. Bake for around 30 minutes (but check after 25 minutes). When the point of a knife or skewer comes out clean, the cake is ready.

Cool in the tin for 10 minutes or so before turning out onto a wire rack to cool completely. Soak with a Frangelico-laced syrup, if you’re so inclined (and I'd certainly recommend it). 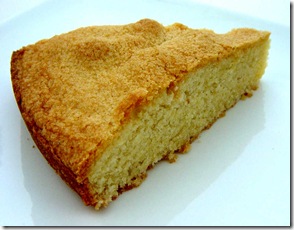