February 13, 2013
This month Dom of Belleau Kitchen is celebrating the start of the third year of his Random Recipe challenge and has graciously allowed us to select a recipe from our books in any way we choose. As an old hand at this particular challenge I thought that this would be a good opportunity to try some of the books that don’t make the usual selection list.

I decided that the biggest challenge would be to select from the ‘lost’ books. ‘Lost’ in the sense that I did own these books once upon a time but now I have only a few recipes left. A couple of books suffered regrettable kitchen accidents while others haven’t survived house moves or have been loaned out and never returned. I missed these books enough to get photocopies or make notes of some of my favourite recipes from borrowed copies. So with a quick random grab from the pile of scraps I came up with a recipe for Country Captain.

I copied this recipe from a book of British cookery that I had around 1980. (It was last seen somewhere in Tooting at about the time Ultravox released ‘Vienna’). I think it's a fairly accurate transcript of the recipe, although I suspect that I may have lowered the fat content and I have used a convenient can of coconut milk rather than the coconut cream block specified in the original. It's a deeply old-fashioned dish that I think is pretty typical of the sort of recipe that turned up frequently in the 1970s.

I seem to remember the book saying that this dish had its origins during the Raj when British army captains stationed in the Indian countryside would have their cooks prepare mildly curried dishes suitable for Western tastes. This is almost certainly nonsense. Country Captain in one form or another turns up much more frequently in the US than the UK and was probably bought back from India to the US by the captains of trading vessels known as ‘country ships’. Whatever the truth of it, I haven’t made this simple dish for years and I must admit that I enjoyed cooking and eating it a lot. This will serve 4 people, although it’s remarkably easy to eat more  than your fair share.

At this point, I should tell you what the book was called. Sadly, I don’t seem to have written that down anywhere and with the passing of more than 30 years and the consumption of a fair amount of red wine I really can’t remember. If anyone has any idea, I'd love to know. 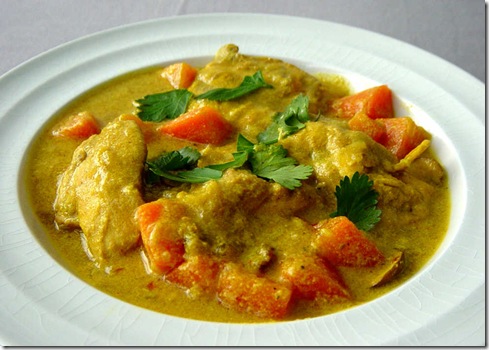 Start the onion frying gently in a little oil. After about five minutes add the garlic and the spice mix. Fry briefly then add 300 ml of water. Bring to a simmer, stirring, and let the mixture bubble away gently until most, but not quite all, of the water has evaporated.

Cut each of the chicken thighs in two. Add the chicken pieces to the onion and spice mix and stir them around for a minute or two. Pour in the coconut milk, bring to a simmer, stirring, and allow the mixture to blip away gently for 20 – 30 minutes until the chicken is tender. If the mixture starts to dry out, then cover the pan.

Meanwhile, peel the carrots and cut into smallish chunks. Steam or boil the carrots until just tender. Stir in the cooked carrots, the mango chutney, the sultanas and the lime juice. Season with a little salt. (Although, it’s not in the original recipe, I added a few sliced and cooked mushrooms as well, just because I happened to have some). Return the mixture to a simmer briefly, sprinkle on some fresh coriander if you have any and serve with rice and a selection of chutneys.