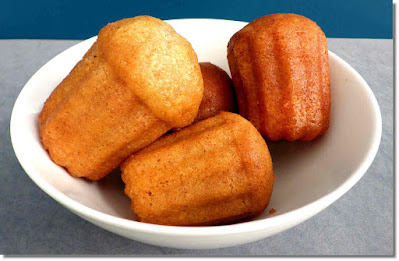 The classic baba is made with an enriched yeast dough soaked in a rum syrup and for many years I thought that everyone made them that way. Eventually a kindly French person took me aside and let me into a secret: a lot of babas are made using baking powder. It's a very quick and easy way to produce babas and I enjoy them just as much as the traditional version.
I used canelé moulds to make the babas simply because I like the shape but small savarin moulds are more usual. I put enough mixture into the mould to make sure that it bulges from the top when cooked. You could be a little more restrained if you like. 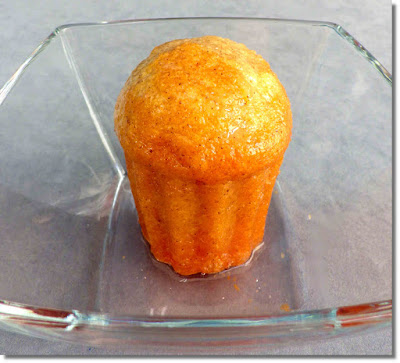 If you want to make something closer to a classic baba using this recipe, then omit the vanilla, possibly reduce the sugar a little in the cake, don't sprinkle with Cointreau and replace the passoã and vodka in the syrup with dark rum and the lime with lemon. Alternatively, don't worry about the tradition and just use whichever flavours you prefer. This is a very forgiving recipe and the baba police rarely arrest anyone for not sticking to the rules.
This will produce at least 8 babas using moulds with a 100 ml capacity, although it does depend on how much overspill you allow. Either serve on their own drizzled with any spare syrup or add a little cream, custard (OK, crème anglaise) or ice cream alongside. In the spirit of the famous martini, you could serve with a small glass of something alcoholic and sparkling.

For the babas:
120 g golden caster sugar
3 eggs
50 g butter, melted and cooled a little
150 g plain flour
1 tsp vanilla powder or vanilla extract
2 tsp baking powder
3 tbsp Cointreau or triple sec (I particularly like the Blood Orange Cointreau)
For the syrup:
200 ml water
200 g sugar
Juice of 1 lime
50 ml passoã
30 ml vanilla vodka (or use plain vodka and a dash or two of vanilla paste or extract)
Preheat the oven to 180°C. Butter the moulds well.
Whisk the eggs and sugar together thoroughly until the sugar has dissolved and the mixture is pale and increased significantly in volume.
Thoroughly beat in the butter, flour, vanilla and baking powder.
Pour the mixture into the moulds. I prefer to have the moulds about two-thirds full but stop at about half full if you prefer a tidier result. Bake in the oven for about 15 minutes. Check that a knife point comes out clean but don't worry if the cakes look a little pale. For this recipe it's important to avoid baking for too long.
While the babas are in the oven make the syrup by dissolving the sugar in the water over a low heat with lots of stirring, then increase the heat and boil for 2 minutes or so. Add the passoã, vanilla vodka and lime juice and continue boiling for another 4 or 5 minutes. Keep the syrup warm until needed.
Once the babas are cooked, remove them from their moulds while they're still warm, place in a bowl and sprinkle with the Cointreau or triple sec.
After 5 minutes or so, once the babas have absorbed the sprinkling of Cointreau, pour over most of the warm syrup. Keep a little of the syrup back, allow it to cool and store in the fridge. Pour a little of this chilled syrup over each baba just before serving.
The babas will keep well for a few days in a closed container in the fridge although they might lose their shape just a little.
Cake Cocktails Dessert France