January 05, 2012
And so here we are in 2012. Let me start by apologising in advance for any gaps in postings during the coming year – sadly, I may not have the opportunity to do as much cooking as I’d like. For the moment, though, there are a few recipes from last year that I want to tell you about. First of all, I must finally get around to posting my canelé recipe.

Canelés can be problematical. There’s even disagreement about how to spell the word. Should there be a double ‘n’? (I stand by the spelling used by la Confrérie du Canelé de Bordeaux who officially shunned the extra ‘n’ in the 1980s.) Then there are the purists who insist that to make canelés you should only ever use purpose-made copper moulds and line them with beeswax.

So, if they’re problematical, why do I bother to make them? Simply because if you get them anywhere near right, then they’re fantastic. If you’ve never tried one, then imagine something like a really good crème brûlée in cake form. They’re great for breakfast, afternoon tea or dessert. The smaller ones also make excellent nibbles alongside sparkling or, best of all, sweet wines. In my opinion, they’re nicest served slightly warm. 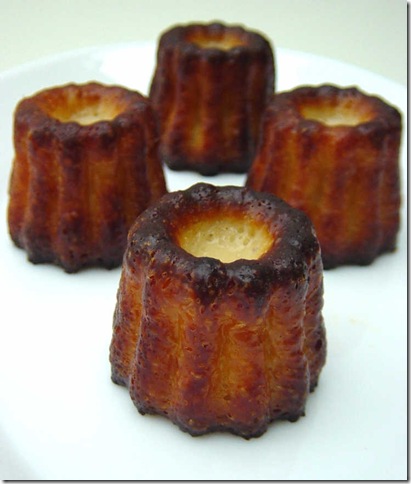 This simplified version of the recipe is easy enough to put together, but you do have to start the day before you want to bake the canelés, because the dough needs to rest for at least 24 hours. It’s a sort of pancake batter cooked like a cake, really.  The only tricky bit is getting the baking right. Canelés need to have a caramelised, slightly crisp exterior and a soft, creamy (but not raw) interior. I make mine in silicone moulds and, although I use the authentic shape, any suitably sized cake moulds will do at a pinch. I fill the moulds around three-quarters full and I use two sizes of mould: the small canelés use around 20ml of batter when three-quarters full and the larger use around 55ml. This amount will make about 45 small or 16 larger canelés.

Put the milk, butter and vanilla in a saucepan. If you’re using vanilla pods, then split them. Bring the mixture up to boiling point with a fair amount of stirring and immediately take off the heat. Let the milk mixture cool. (Some people say that milk should not be cooled at all; others say that it should be completely cold. I tend to use it slightly warm but mainly because I just can’t be bothered to wait any longer.) If you used vanilla pods, then scrape the seeds into the milk and discard the pods.

The next stage is easier with an electric stand mixer but it’s not essential. In the mixer bowl, combine the flour and sugar. Add the eggs and yolks and begin whisking them in. Keeping the machine running, gradually pour in the milk mixture followed by the rum. You should end up with thinnish batter without any lumps. Pour the batter into a jug, cover and put in the fridge for 24 hours.

The next day, preheat the oven to 210°C. If you’re not using silicone, then butter the moulds. Whisk the batter briefly and pour into the moulds, filling them about three-quarters full.

Bake small canelés for 35 – 40 minutes and larger canelés for 45 – 50 minutes. The canelés should be a darker brown colour than most cakes (but not black) and should feel springy to the touch. Allow them to cool in the moulds for around 10 minutes before attempting to remove – they’ll be rather fragile while hot. 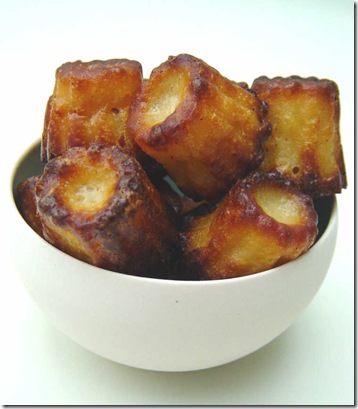