August 27, 2019
It's more than six years since I bothered you with my general-purpose “traditional” French macaron recipe and at the time I promised to irritate you still further with my recreation of the macaron from the Picardy town of Amiens. Well, I may be slow but sometimes I do get there in the end.

I have a fascination for the traditional food of Picardy not only because it's just across the channel but also because it's so often neglected, even by the French. This particular example of the macaron is said to date back to the sixteenth century, although I'm not pretending that my version is truly authentic. In fact, I've been told that if you make the Amiens macaron in less than three days, then you're not really trying. This type of macaron is sometimes baked in small cake tins, which will give you a more regular shape but I'm pretty confident that the more traditional bakers of Amiens don't do it that way. This version tends to be chunkier than most other types of macaron, giving you more of a contrast between the soft insides and the crisper outside. They're excellent with strong coffee and they keep pretty well in an airtight container. 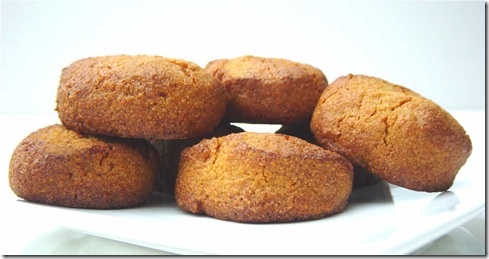 For best results, begin this recipe the day before you want to bake it – it's quick to put together before you go to bed. In fact, the whole recipe requires very little effort, just a little bit of planning.

I've found that different types of almond extract tend to vary quite a bit in strength, so adapt the amount given here to suit your personal taste.

Mix the ground almonds and both of the sugars together in a bowl. In a jug, stir together the honey, jam, vanilla paste or extract, almond extract and the egg white until thoroughly combined. Add around a third of the liquid to the ground almond and sugar mixture and stir in thoroughly. Repeat until all the liquid has been combined and the mixture has turned into a paste. Cover tightly with cling film and chill in the fridge overnight (or, at least, for several hours).

The next day, preheat the oven to 170°C. Spread a layer of cling film on the work surface and spread the mixture out in a line on the film. Roll up the cling film and twist the ends to form the macaron mixture into a sausage. You need a sausage of between 3 and 4 cm thick. (You don't have to use cling film to roll the mixture, but I think it makes the job a lot easier). Carefully unwrap and cut the mixture into slices of around 1.5 or 2 cm long. You should get around 10 or 11 macarons.

Place the macarons on a lined baking tray, reshaping them a little if they get knocked out of shape in the process. Bake in the oven for around 15 – 20 minutes. It can be a little tricky to judge when the macarons are ready, but they should have an even light brown colour. (Be careful, they can start to burn quickly if left too long.) Cool on a wire rack and store in an airtight container once cold. 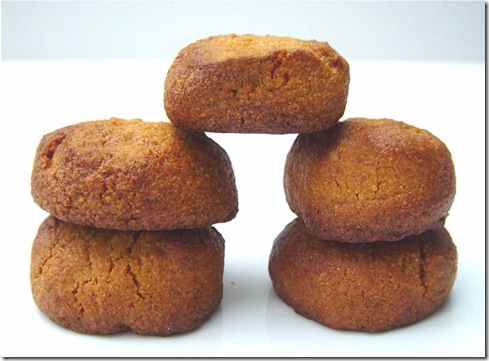