September 18, 2011
For this month’s Random Recipe challenge  Dom of Belleau Kitchen has challenged us to pick a recipe at random from among those we've torn out of magazines, newspapers and the like. Fair enough, I thought, and went to my box of disorderly clippings and pulled out a recipe for Navettes cut from a well-known French magazine (I'm naming no names). I was a happy bunny because I've always fancied making these.

Navettes are mostly associated with Marseille and are somewhere between a cake and a biscuit. They're supposed to look a little like boats and, according to one story, may date back as far as ancient Egypt where they were made in the likeness of the boat that carried Isis. Not sure I really buy that, but I love a good story and this does seem to be a genuinely very old recipe.

So I cheerfully began to make the navettes. But, Dear Reader, let this be a salutary lesson to us all. As I've discovered more than once in the past, the recipes in magazines are sometimes not subject to the same degree of testing and proofreading as those in books (or those of my lovely fellow bloggers, of course). It quickly became clear that this recipe was never going to work – the ingredients and amounts given were just plain wrong.

But was I downhearted? Well yes I was a bit, but rather than abandon the navettes, I've  played around with the recipe until it works. You can nibble on these at any time of the day and they're solid enough to carry with you for sustenance on a country walk. They're also good to dip into creamy desserts or to serve alongside ice cream. Having said that, I have to admit that the texture is not like a classic cake or biscuit and the orange flower water flavour can be a bit of a challenge for some people. In other words, be prepared for something a little different that might delight some but cause others to look at you a bit oddly. 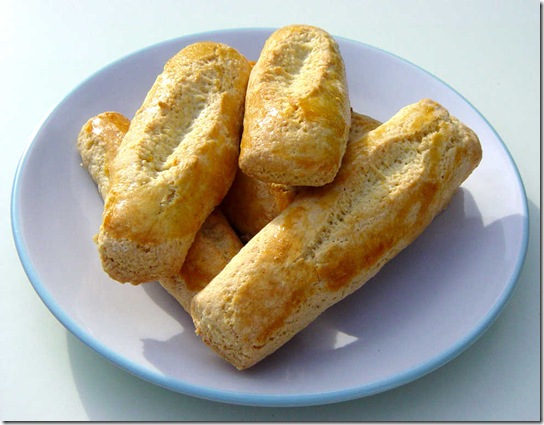 You can make these smaller or larger as the mood takes you, but this amount should give you between 15 and 20 navettes of a decent size.

Sift the flour into a bowl and make a well in the centre. Lightly beat the two whole eggs and pour them into the centre of the flour. Add the sugar, softened butter, pinch of salt, baking powder, orange flower water and the lemon zest.

Gradually mix the ingredients together with your fingertips, incorporating the flour bit by bit. Gradually work in enough of the water to form a smooth but still quite firm dough. You may not need all the water. As soon as the dough comes together and starts to feel smooth, stop working it.

Divide the dough into 5 pieces. Roll each piece into a longish sausage shape – how thin is up to you, but an overall length of somewhere between 30 and 40 cm is probably about right. Cut each sausage of dough into three roughly equal pieces. Flatten each piece a little into an oval shape. Place on oven trays lined with silicone sheets or non-stick paper. Use the point of a sharp knife to cut a slit along the middle of each navette. Set aside for an hour at room temperature.

Preheat the oven to 160°C. Beat the remaining egg yolk with a little water and paint this mixture over the navettes. Bake in the oven until golden and cooked through. How long this takes will depend on how large you’ve made them, but around 15 – 20 minutes should do it. Allow to cool fully on a wire rack before munching. 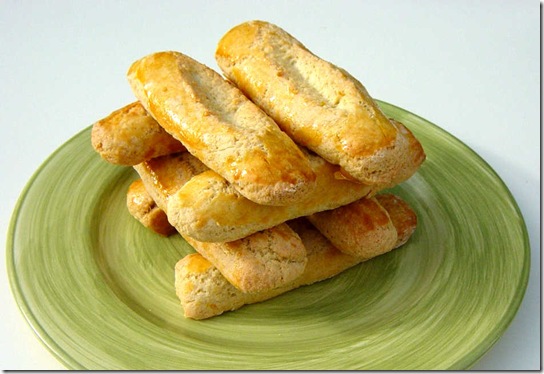