The Reine de Saba (the Queen of Sheba cake) is a well-known, classic French recipe – I'm fairly sure there's a version of it in one of Elizabeth David's books – but it has a lot of variations. For what it's worth, this is the way I make it and, happily, it's made a small dent in the ground almond mountain. 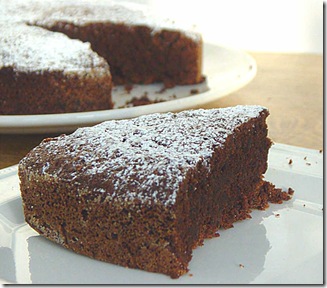 Prepare a round 20 cm cake tin thoroughly, since this cake is fond of sticking to things. I line the base, rub the tin with butter and sprinkle with a little caster sugar.

Melt the chocolate with the Grand Marnier – normally I would do this in the microwave, but for this cake, it's easier to use a bowl set over a pan of barely simmering water. Once the chocolate has melted, keep the bowl on the heat and add the butter a little at a time, stirring as you do so. Once all the butter has been incorporated, take the bowl off the heat and allow it to cool a little.

Whisk the egg yolks with 80 g of the caster sugar until they're very pale. Whisk in the potato flour and cocoa powder. Stir in the ground almonds and then the chocolate and butter mixture.
Whisk the egg whites to the soft peak stage, then whisk in the remaining 30 g of caster sugar a bit at a time until the whites are stiff.

Pour the mixture into the prepared cake tin and level it out. Bake in a 170ºC oven for around 30 minutes, but check after 25 minutes. The cake should have formed a light crust but should still be a little soft and gooey in the middle.

Cool the cake in the tin before attempting to turn it out – the Reine de Saba is a fragile thing. Hopefully, the cake won't sink too much, but a little cracking and crumbling can be hard to avoid. If you feel like it, lightly dust the top of the cake with icing sugar or cocoa powder or decorate with toasted almonds or almond flakes. This is definitely a dessert-style of cake, so if you happen to have a little crème fraîche and maybe a few raspberries then they would be most welcome. 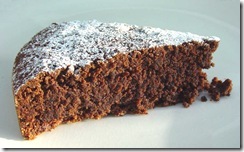