September 08, 2014
Bonjour tertous ! OK. that's just about all the ch'ti I can speak but I thought it was about time for a ch'ti recipe. After all, it's from just across the channel so it's almost a local dish.

In case you're not familiar with Maroilles, it's a soft cow's milk cheese with an orange rind that's made in northern France. Those simple facts sound harmless enough but there's a little more to it than that. The aroma of Maroilles can be scary. If you don't eat it quickly, it could start to set off fire alarms and endanger low-flying aircraft. On the other hand, it tastes great. As well as being a fine addition to the cheese board, it’s also a superb cheese for cooking.

One of the commonest dishes using this pushy little cheese is the Tarte au Maroilles. You can find different versions of this tarte around Nord-Pas-de-Calais and Picardy but the most traditional form has a yeasted dough base rather than a layer of pastry. Think of it as a sort of enriched pizza dough. (I've now upset everyone from the north of France by saying that).

If you can’t get hold of any Maroilles, then you could substitute another cheese.  If you happen to venture into the Boulonnais region then you could do worse than to look for some of the cheeses made by the Bernard brothers in Wierre-Effroy. The Fruité du Cap Gris Nez would be ideal but the Fleur d’Audresselles or the Fort d’Ambleteuse would also do very nicely indeed. (As usual I should point out that I've no connection with the brothers and haven't received anything for nothing. I just like their cheeses.) Failing that use a cheese that isn't too soft and ripe but does have a powerful flavour: Chaumes, Reblochon or Pont-l'Évêque come to mind.

This is not a difficult dish to make but, if you happen to have a bread making machine, then it will need remarkably little effort. (The dough's not difficult to make without a machine, if you'd prefer to remain traditional). I use a Panasonic bread machine and it recommends the addition of the ingredients in the order I've given here, but follow the instructions for your particular breadmaker since the recommended order is often reversed. 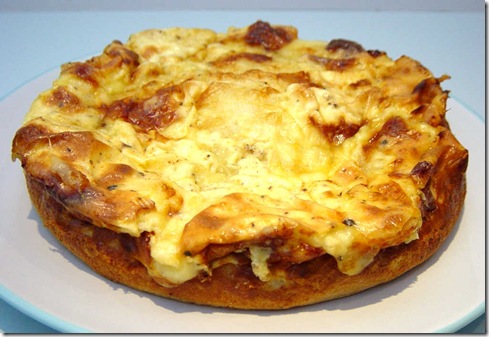 You can serve the tarte hot or cold, but I think it’s at its best when warm and accompanied by a green salad. This makes one 25 – 26 cm tarte, which should serve at least 8 as a starter, or 6 as a lunch.

Add all of the base ingredients to the breadmaker in the order recommended by your manufacturer. If your machine has a pizza dough setting then use it, but, if not, use the basic dough setting. Once the program is complete, you should have a light, slightly sticky dough. Place the dough in an oiled bowl, cover and leave to prove in a warm place for 45 – 60 minutes.

Butter a 25 cm or 26 cm diameter pie dish. (The tarte topping tends to bubble up more than you might expect and so a deeper dish is no bad thing.) Knock the dough back and roll it out until it covers the base of the pie dish. Some recipes suggest that you should fully line the dish by spreading the dough up the sides, but I was told in Picardy that it should remain flat.

Preheat the oven to 180°C. Slice the Maroilles quite thinly and cover the dough base with the cheese. You don’t have to remove the rind of the cheese, but unless the cheese is very fresh then I think it’s better if you do. Beat the egg and stir it into the crème fraîche. Season this mixture with the pepper, salt, paprika and cumin. (The paprika and cumin aren't traditional, but they do add a little extra something). Pour the mixture onto the tarte and spread it out to cover the whole of the surface (you don’t need to be too fussy or precise about this). Bake in the oven for 30 – 35 minutes or until the top is golden and puffed up. 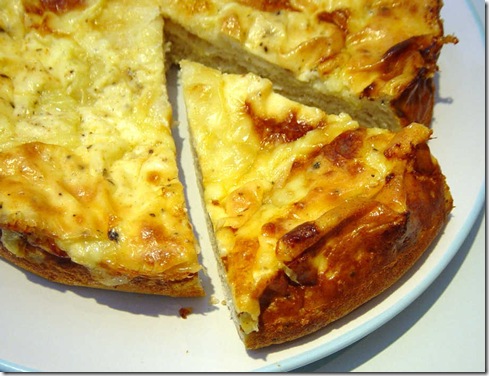 I will be forever grateful to Richard of ‘Maison de Plumes’ in Heuchin for persuading me to try Maroilles for the first time a few years ago. (Of course, I'm sure that he would never sink so low as to use a breadmaker).
Breadmaker Cheese France