February 23, 2015
In Picardy, near the mouth of the Somme, lies the ancient region of Ponthieu (unless I've got my geography wrong again) where there lives a strange beast known as the Gâteau Battu. This translates as ‘beaten cake’, but imagine a tall, light, buttery, yeasty brioche and you'll be somewhere near it. I first tasted this gâteau over a decade ago and, although I loved it, I didn't think about trying to make it at home. Then a few years ago, I met Michel Savreux, chef and member of the Confrérie du Gâteau Battu. His enthusiasm for local food and the Gâteau Battu in particular inspired me to attempt to make my own version. (I was particularly impressed when I was shown the truly wonderful hat in the shape of a Gâteau Battu that members of the Confrérie wear on ceremonial occasions).

It turns out that making a Gâteau Battu on a small, domestic scale is not quite as easy as I thought it might be. It's not that the basic recipe is a secret – the Confrérie have published a recipe – it's just that scaling it down to a single gâteau and getting the flavour and texture the way I wanted it proved to be a bit of a challenge. I started with the official recipe and modified it in line with the recipes and techniques of the master baker Francis Fréville, who's been making these things far longer than I've been eating them. After a fair bit of faffing about I've managed to get a recipe that I'm happy with, although there's no real substitute for the true Gâteau Battu, prepared by a traditional baker. So, if you find yourself in Picardy, don't miss the opportunity of eating some of the real stuff.

Although traditionally this gâteau was eaten at Easter, it's very adaptable and can be served in a number of ways at any time of the year. If you want an authentic taste of Picardy, then try serving it as a dessert with a dollop of rhubarb compote or jam and perhaps some crème fraîche. Other fruit compotes will work very nicely with the gâteau if rhubarb isn't available. A small piece can also be enjoyed as an aperitif with a glass of champagne or, more authentically, cider. Of course, it goes well with tea or coffee at any time of the day and, personally, I love a slice as part of a lazy breakfast.

I used a brioche tin with a capacity of 1.25 litres for this Gâteau. This is not the correct shape - it should be deeper with straighter sides – but it will do for now. If you want to get the authentic shape and you happen to find yourself in Abbeville, then you can buy a genuine Gâteau Battu tin. (Be warned - they're not particularly cheap.) 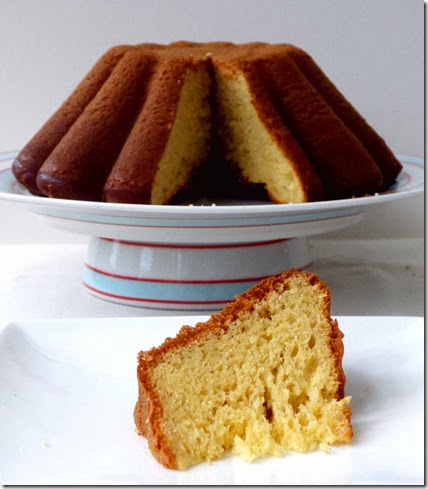 A stand mixer isn't absolutely essential for this recipe, but you’ll need significant reserves of patience and energy if you don’t use one.

Stir the yeast into 50ml of warm water and set aside while you prepare the rest of the ingredients. Put the flour, sugar, salt, egg yolks and butter into the bowl of a stand mixer. Add the yeast, which should have started to react a little by now. Whisk at medium speed for 15 minutes, scraping down the sides of the bowl every now and then.

Butter the tin thoroughly and add the dough - the tin should be roughly one third full. Cover with a clean, damp cloth and leave somewhere reasonably warm for around two hours. At the end of this time, the dough should have risen to near the top of the tin. The time taken could vary so check the dough every now and then.

Preheat the oven to 160°C. Bake the gâteau for around 30 minutes or until the top has browned and a cake tester or skewer pushed into the centre comes out clean or with the tiniest crumb on it. The gâteau should have a dark crust, but if it's in danger of becoming too dark or looking burnt, then cover it loosely with foil for the last 10 minutes of baking.

Place the mould on a wire rack and let the gâteau cool thoroughly in the mould before removing.