November 05, 2018
For years I thought of speculoos as the little, wrapped biscuits that often accompanied a bad cup of coffee at conferences and business meetings where people said "going forward" a lot. Then I discovered the almost fanatical devotion to this biscuit in Belgium and northern France and I realised that speculoos must have hidden depths. These days I've long since given up the conferences and the "going forward" people but I've learned to love one or two speculoos alongside good coffee (or tea if you're making it). There's no shortage of the mass-produced, commercial product (whatever they choose to call them these days) but a lot of bakers in northern France, both professional and amateur, make their own. Many of these are more substantial than the usual commercial biscuit and a little different in texture too.

Most of the recipes I've come across add egg to the mixture but I've been told that egg isn't truly authentic (although I admit that it does make the dough easier to handle). As usual, there's a very good chance that what I've been told isn't true but I really wanted to try an eggless version in order to recreate some of the northern French variants of this little treat. So, after a bit of faffing about with different mixtures, this is my eggless recipe. The resulting biscuit is firmer and denser than most commercial offerings but is much closer to the ones served with coffee in some of the secretive speculoos dens of northern France. (I could say more but the first rule of speculoos club is "shut up and eat your biscuit").

This is a very simple recipe that can be adapted to suit pretty much any size, shape or flavouring you fancy. Some bakers use a much more complex spice mix than mine, but, on the other hand, there are some who stick to cinnamon and regard even the use of a little cardamom as a modern aberration. 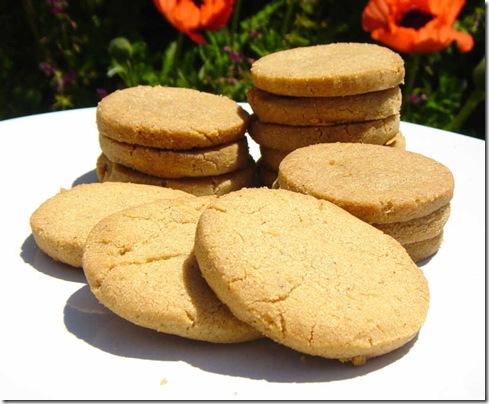 This will make quite a few biscuits. You can create pretty much any size or shape as the mood takes you, but as a guide I used a 5 cm round cutter and got 36 biscuits with a thickness of roughly 5 mm out of this amount of dough. You can also make domed, macaroon or amaretti shaped biscuits that are excellent for sitting on a saucer beside your espresso by simply pulling off small pieces of dough and shaping them roughly into balls before baking. The biscuits keep well in an airtight container.

175 g brown sugar (I generally use a mixture of light muscovado and soft brown sugar)
140 g unsalted butter, softened
250 g plain flour
1 tsp baking powder
1½ tsp cinnamon (or more if you feel like it)
A pinch or two of freshly grated nutmeg
A pinch or two of ground ginger
Seeds of 3 or 4 cardamom pods, crushed

Cream the butter and sugar together thoroughly. Add the flour, baking powder and spices and beat together well. The dough will be stiff, but that's the way it should be. Form the dough into a ball, wrap in clingfilm and chill in the fridge for about an hour. If you leave it to chill for longer, then it's best to let it warm up just a little before using.

Preheat the oven to 170°C. The dough won't roll out easily, so I think it's easiest to pull chunks of the dough off the ball and simply flatten them on a board to a thickness of around 5 mm. You can then use a pastry cutter to cut out any size or shape you like or roll into balls (see above). Place the shaped biscuits on lined baking sheets and bake in the preheated oven. The 5 cm biscuits will take around 10 minutes. To be honest, it's not that easy to judge when they're ready. Normally, I'd look for a change of colour in a biscuit as it bakes, but these are brown before they go into the oven. It's safest to do a quick trial bake of one or two biscuits to be sure.

Allow the biscuits to cool for a few minutes on their baking trays before sliding onto a wire rack to cool completely. 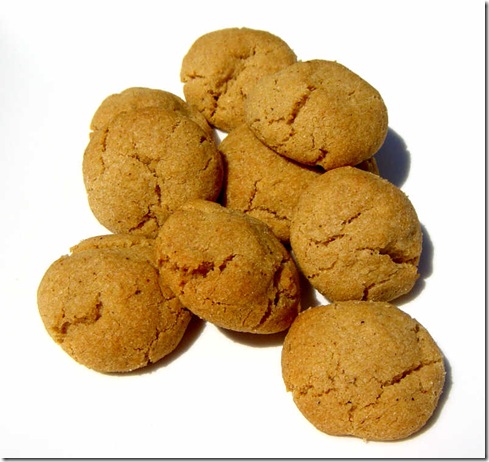