Europom and an Apple, Ginger and Lemon Cake

October 30, 2010
I recently wandered along to the exhibition held as part of this year's Europom event – well, it was just down the road at RHS Wisley. Europom might sound vaguely Australian but actually it's a group of very laudable European organisations promoting the conservation of the widest possible range of fruit. Or as the posh lady who elbowed me out of the way to get to the front of the exhibit shouted to her even-posher friend “It's just a load of apples and pears!” (I left out the swear word). 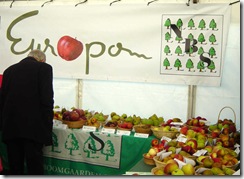 I think it's safe to say that the elbow lady was right - there were a load of apples and pears and after being suitably impressed and thankful that such collections exist I then started to feel guilty that I tend to use such a small variety of fruit in the kitchen.

So for this recipe I got hold of some Byford Wonder apples from the fruit gardens at Wisley. I'm led to believe that Byford Wonder is a 19th century Herefordshire variety of cooking apple and compared to the more common Bramley seems less sharp and less prone to collapse. Of course, you can use more common varieties – I'm only showing off.

Years ago, I started to collect different apple cake recipes from Dorset, Devon, Cornwall and Herefordshire. I then realised that in fact there was a vast number of different recipes and most were claimed to be authentically local. I've no wish to stir up the great apple cake riots of 1969 again so I must point out this recipe is not authentic. It started out as a Devon recipe, got confused with a Hereford recipe and is now officially all over the place.

Grease and line the base of a 20 cm cake tin. Preheat the oven to 170°C. Mix the dates, sultanas and stem ginger together and stir in the ground ginger.

Cream the butter and sugar together thoroughly. Beat in the eggs a little at a time. Gently work in the flour and finally fold in the apples and the dried fruit mix. Spoon the mixture into the prepared tin and bake for 45 – 50 minutes. If the top of the cake seems to be browning too quickly after 20 minutes or so, then cover loosely with some foil. The usual test of a skewer coming out clean should tell you when the cake is done, but with that much apple in the cake this can be a little tricky.

Let the cake cool for at least 10 minutes before removing from the tin and leaving to get cold.

Make a thin icing by combining all the icing ingredients together and drizzle this over the cake. You could use extra lemon juice rather than lemon extract but the idea is to get an intensely lemon hit from a relatively small amount of icing.

This cake works just fine with a cup of tea or coffee but can also be served as a dessert with something creamy alongside.