May 22, 2012
The other day, for some strange reason, I thought about Nathaniel Gubbins. I'd read some of his musings many years ago but it was obviously time for a return visit. Nathaniel Gubbins was an alias of Edward Spencer who was writing about food around the end of the 19th century. After a quick search I came up with probably his best known book 'Cakes and Ale'.

For this month's Random Recipe challenge Dom of Belleau Kitchen has asked us to select the first or last recipe in a randomly chosen book. It occurred to me that you can't get a much more randomly chosen book than this, so I thought I'd give it a go. 'Cakes and Ale' isn't really a recipe book - it's described by the author as a 'dissertation on banquets interspersed with various recipes'. Sure enough in chapter two I came across the first "real" recipe: 'Gubbins Sauce'

This is probably one of the best-known British devilled sauces and I've seen it revived a number of times with or without variations. What I hadn't realised was that Mr Spencer intended this sauce to accompany 'legs and wings of fowl' at breakfast time. That’s a little early in the day for me, so I'd recommend serving it with grilled or simply-roasted chicken, turkey or pork for dinner. This time I used it with roasted pork fillet. Mr Spencer describes the sauce as 'invaluable, especially for the sluggard' – well, that’ll be me, then.

This is not exactly the original recipe but it’s only slightly adapted. The amount given here should make enough sauce for 4 reasonably restrained people or 2 greedy lovers of devilled sauce. It’s pretty simple to put together but it’s best to not make it too far ahead of time. 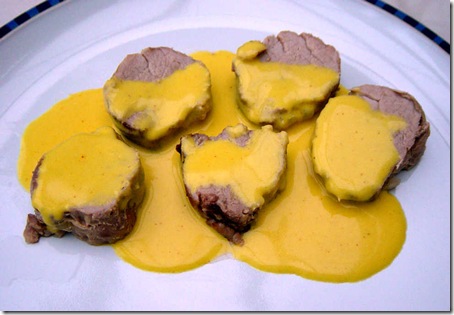 You’ll need a double boiler or a bowl suspended over barely simmering water. Melt the butter gently in the heated bowl. Stir in the mustard followed by the two vinegars. Once these are thoroughly combined, stir in the double cream. Season with salt, pepper and a little cayenne. Keep the sauce warm (but don’t let it get too hot) and pour over your chosen meat immediately before serving.