December 15, 2012
What’s the difference between confit d’oignon and onion marmalade? The answer is: one of them is French.

For this month’s Random Recipe challenge Dom of Belleau Kitchen has asked us to select a recipe at random from ‘a book or books you received for Christmas last year’. Now this is a bit of a problem for me because I pretty much gave up the Christmas presents thing quite a few years ago. Looking through my cookery book shelves, though, I came across a book that I seem to remember buying at a charity Christmas fair a couple of years ago. I hope that will do.

‘The Paris Café Cookbook’ by Daniel Young, published back in the 1990s, is actually an American book. As far as I know, it was never published in the UK and it was probably donated by one of the many US expats who live around here.  The book is a guide to the French capital’s cafés and a selection of the recipes you might find there.

The randomly selected  page took me to the Café de l’Industrie and a recipe for confit d’dignon made with red onions. This is a very appropriate recipe for the time of year since confit d’oignon is consumed in large quantities at Christmas time in France. Of course, you don’t need to follow the French Christmas tradition and serve this alongside foie gras; it will sit very happily alongside many different meats, pâtés, poultry and cheeses. 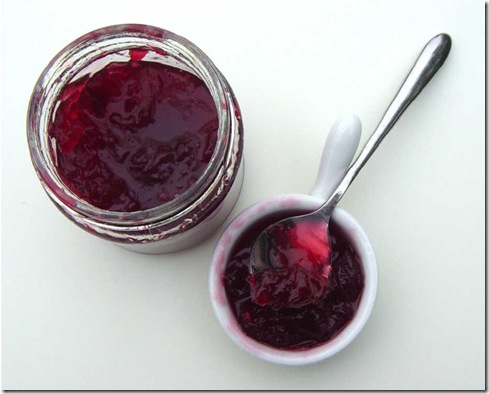 To be honest, this is pretty similar to many other onion marmalade and confit recipes but, like a number of other French recipes I've come across, it adds grenadine to the mix, which gives not only a pleasing sweet and sour flavour but also a fantastic colour. I confess that I've changed the quantities a little and lengthened the cooking times. I've no excuse really; it’s just that I like very soft, melting onions. Depending on how much you reduce the confit, this will fill around 2 standard jam jars or 4 smaller jars.

Peel and slice or chop the onions quite finely, although a little variation in size will be no bad thing. A food processor will make this a lot easier, of course. Heat the oil in a saucepan and add the onions. Fry gently with plenty of stirring until the onions are thoroughly softened. This will take at least 20 minutes, but shorten this time if you prefer more texture in the finished confit.

Pour in the wine vinegar and the grenadine and bring to the boil, while continuing to stir. Add the sugar and stir to dissolve. Bring back to the boil and boil for 10 minutes. The confit will thicken, but there’s no real need to worry about a setting point as you would with jam. Stir in a generous seasoning of salt and pepper. Allow the confit to cool a little before pouring into sterilised jars and sealing. Et le tour est joué, as they say in Paris.

The confit will have pretty decent keeping qualities, but I think it’s best stored in the fridge and used relatively young.

The Café de l’Industrie is still very much in business and you can find it on the corner of the Rue St-Sabin and Rue Sedaine not far from the Bréguet-Sabin metro station.
France Onions Random Recipe