October 05, 2015
This recipe is in two parts, both of them resurrected from the 1980s. The yoghurt coated lamb is based on the dishes that I ate in the Indian restaurants of south London in that strangely beguiling decade. It was made with larger cuts of lamb back then (leg usually) and used to cost a fair bit. Since I didn't have much money, it wasn't long before I tried making my own version. I think I first used a recipe from the Curry Club but I've played around with it over the years since.

I find that this is a good way to use those small (and hopefully cheap) cuts of lamb from the supermarket. Quite often the smaller cuts can be a little dry once cooked but the yoghurt and spice mix will seal in the juices and keep the lamb full of flavour as well as moist. Of course, you can serve this lamb hot alongside vegetable or lentil curries but I've always enjoyed eating the leftovers so much that I thought I'd make some specifically as a cold dish instead.

The redcurrant “mayo” is a real joy - sharp, creamy and a ridiculous colour (very 1980s actually). It's easy, if a little messy, to make and can be used alongside many cold dishes but is especially good with richer meats such as lamb or duck. The extra bit of good news is that it can be made with (defrosted) frozen redcurrants when the fresh berries aren't around. 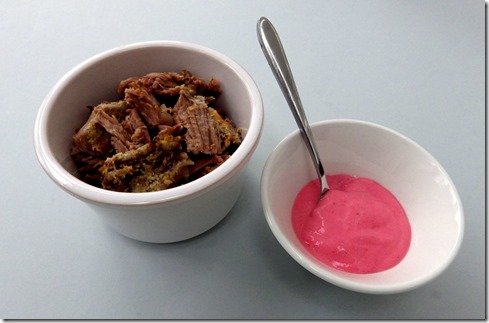 This will serve 2 but is at its very best when combined with other dishes in a mezze style meal for a larger group.

Small piece of rolled boneless lamb shoulder (around 400 - 500 g)
125 ml yoghurt - a thicker Greek style is best and 0% fat will be fine although it might be a little less easy to handle
2 tbsp ground almonds
1 tbsp coconut powder
1 shallot or small onion, roughly chopped
1 garlic clove, peeled and roughly chopped
1 tsp fennel seeds
½ chilli, deseeded (add more if you like or replace with some dried chilli flakes if you don’t have fresh)
Seeds from 1 black cardamom pod (green will be fine too but the smokiness of black does add extra depth of flavour)
2 tsp dried mint (you can use fresh instead but the dried seems to give a more rounded flavour)
A generous pinch of freshly-ground black pepper
2 tbsp coconut oil, melted (or use another plain oil)

Put the shallot (or onion), garlic, fennel, chilli, cardamom, mint, pepper and oil in a blender or processor and whiz until smooth (or reasonably smooth). Stir this mixture into the yoghurt together with the ground almonds and coconut powder. Place the lamb in a small bowl and coat it thoroughly all over with the yoghurt mixture. Cover and place in the fridge overnight or, at least, for several hours.

Preheat the oven to 140ºC. Place the lamb on a small oven tray without disturbing the yoghurt coating if at all possible (it's best to line the tray with foil - ideally non-stick - if you want to avoid some challenging washing up). Roast for 2 - 2½ hours until the lamb is very tender. Pull the lamb apart, discarding any large pieces of fat and put the lamb, together with as much of the yoghurt coating as you like into a bowl. Either serve at once while the lamb is still hot (or, at least, warm) or allow to cool, cover and place in the fridge until needed. Take out in advance and allow to come close to room temperature before serving.


This will probably make a little more than you need for 2 people but I've found that smaller amounts are difficult to handle.

100 g redcurrants, frozen and defrosted if fresh aren't available
2 - 4 tsp agave nectar, or just use icing sugar if you don't have any
2 - 4 tbsp sunflower oil, or another lightly-flavoured oil

Place the redcurrants, the nectar (or sugar) and a little salt and pepper into a blender or food processor and whiz until reasonably smooth. With the motor still running, slowly pour in enough oil to obtain a mayo consistency and until the mixture takes on a slightly disturbing pink colour. Serve at once or store in the fridge until needed - this won't be as stable as a classic mayonnaise so it's best to avoid storing for too long just in case. Take the mayo out of the fridge a short while before serving.

So why have I felt compelled to revisit the 1980s like this? I think I know who to blame for this fit of nostalgia. There's a reborn version of The Immaculate Fools with a new album and a tour of Spain. I'm certainly not selected or enchanted any longer but I honestly never thought I'd live to see a revived Fools and I can't deny that it's a very good thing.