May 06, 2011
I know that there are plenty of other versions of this recipe around, but this is how I make it and, believe me, it’s really easy and very yummy. You do need some time, though, so it’s a good recipe for lazier days when you’re hanging around the kitchen doing something else. I use the confiture in a large number of desserts but just drizzled over ice cream with pears or bananas remains a firm favourite. If you want to use it for pouring or drizzling rather than spreading, then simply stop the cooking process before it gets too thick.

The bicarbonate of soda in this recipe seems a little odd but seems to improve the final result, presumably by adjusting the acidity. Anyway, someone from Normandy told me to put it in and I reckon he knows a lot more about it than I do.

Depending on how thick you make it, this recipe should produce around 500 – 600ml of confiture. 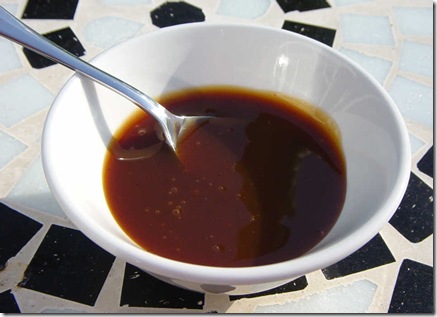 Place the milk, sugar and bicarbonate of soda into a large saucepan. Bring the mixture to the boil while stirring a lot to ensure the sugar has dissolved. As soon as boiling point is reached, lower the heat and skim some of the foam from the top (there’s no need to get it all).

For the remainder of the cooking period the mixture should be barely simmering: the surface of the liquid should be trembling with maybe the occasional bubble. The mixture will need to cook gently in this way for at least 2 and probably more like 2½ hours. Throughout this time, you need to keep stirring regularly and check that the liquid is not simmering too actively.

Towards the end of this period, the cooking will seem to speed up, so stir more often and keep a careful eye on it. When it’s ready, the mixture will have darkened and thickened somewhat. As it cools, the confiture will thicken a little more, so take the saucepan off the heat when you think the mixture is still a little too thin. Whisk in the vanilla paste as soon as the pan is off the heat.

Allow to cool a little, pour into a clean container or sterilised jars and store in the fridge.  Not sure how long this will keep, because it seems to get eaten too quickly to find out. 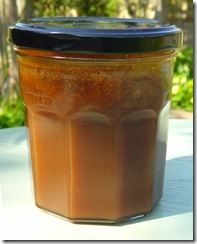